July. Mid-summer is upon us, and the warmth of the sun soaks into our bodies and minds and lets loose under the stars on steamy nights.

These days we’ll sit on the beach with an iPod and a Coke Zero, listening to Britney Spears and watching the waves. But how many of us remember how it was back in the day…the 80’s? 70’s? 60’s? 50’s? Here’s a little taste of what things were like on the hot summer days and nights of yesteryear…

It’s the weekend and you’re itchin’ to get in that jalopy and head for the surf. You’re tired of watching Gilligan’s Island on the little Black and White TV, and you just want to get out in the sun. So you get your best girl on the line and tell her to high-tail it down to your pad, so you can pick up the rest of the crew and head down to the beach. She shows up wearing one of those hot new two-piece red and white polka dot bikinis and a flower sarong, cat-eye sunglasses and a big pink straw hat. Your eyes pop but you don’t let on how bitchin’ she looks.

You and your girl jump into the ’48 Plymouth Woody Wagon your uncle gave you when it turned 50,000 miles. It still runs, creaks a lot but what the hell, it’s got room for nine people plus coolers and surf boards. You check to make sure you’ve got your AM transistor radio, dial it in to the only station that plays rock ’n’ roll, jump on the starter and get the Woody moving. Your girl giggles as the car lurches out of first gear and takes off down the road.

Johnny B. Goode is playing on the squwakbox. You stop and pick up your pals, those guys with names like Skids, BlackJack, Krazy Maynard and Lemonhead. They bring their girls too… Betty, Alice, Ginny and Red. All ten of you pile on top of each other in the wagon along with three coolers filled with baloney and square-cheese sandwiches, apple pie, RC Cola, Utz potato chips and Hershey bars. BlackJack, the ‘bad boy’ of the crew, slips a hip-pocket bottle of Old Crow in under the ice. Four surf boards and a half a dozen beach chairs and blankets are stuffed into the back, and you’re off.

The beat-up jitney makes it to the edge of the sand, and you all fall out and pile up the goodies in a nice spot by the water. Down-beach there’s a couple of kids playing Frisbee. Next to the lifeguard stand are some to chicks hula-hooping. The AM radio is cranked as high as 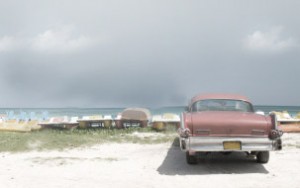 it can go, blasting out a crackly and distorted array of hits from the Beach Boys’ Fun Fun Fun to Bill Halley’s Shake Rattle & Roll. The girls set up the blankets and chairs and the big yellow and white-striped beach umbrella as the guys run straight for the waves with the boards. In the surf they fall a lot, and so do you, but you finally catch a good wave and ride it all the way in. Then you and the boys turn the boards over to the girls and watch them catch the waves as you chow down on the sandwiches and pop.

As the night approaches, you head down the beach to a bonfire, and set up camp near the edge. There’s a guy playing guitar and singing slow Elvis songs, and another guy on bongos joins in. Soon everyone is sitting around the fire sipping (spiked) sodas and swaying with the music. Your girl, still in that smokin’ two piece, snuggles up close. The waves slide lightly into the shore as the stars and moon reflect off the surf. She leans up for a kiss…

Well, I guess some things never change, no matter how many years slide between.