There’s been a lot of buzz about the hit show “Mad Men” and the gloriously egocentric style of the era. But the show only touches on some of the coolness of gadgetry associated with the time; The ’60s was a decade of new, fun stuff made to fill your office, car and home, from electric cigarette tables lighters to pocket-sized spy cameras. With all the technology and all the groovy gadgets that’ve come up in the last 20 years, there’s nothing to compare to some of the simple, clever novelties of the second half of the 20th century.

Case in point: My favorite book, How To Get Along With Your Mother-In-Law, by Hugh R. High.

This relic of the swingin’ ’60s was saved from a box of junk destined for the flea market, way back in the late 1980’s. My parents, who were antique dealers in the ’70s, still had a few boxes of goodies left over in storage when I was in high school. I made it a point to raid those boxes and grab anything that was too cool to sell off. This book, along with a bunch of other retro fun stuffs, was among them. 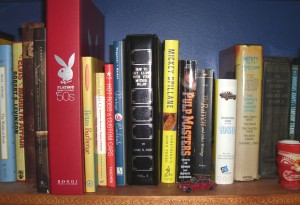 Of course I had no idea what it was when I first saw it. Imitation leatherette bound, and closed with a snap, it looked like a plain vintage book at first glance. Then I realized it wasn’t a book at all, but a box. At first I figured it was one of those hide-away boxes people used to keep their valuables in to fool stupid burglars. Man, was I pleasantly surprised when I opened it up! 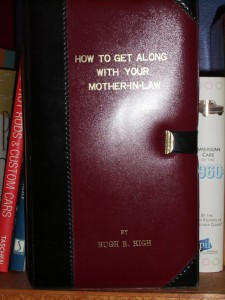 What a find! This was one of those things you see in old movies, or read about in gag magazines from the old days. For it wasn’t a hiding place for valuables…it was a hiding place for a little hooch and a couple of shot glasses! No kidding…built into the chamber of this fantastic tome were straps holding down two metal tumblers and a hip-pocket sized (unfortunately empty) bottle of whiskey. Fannntastic! 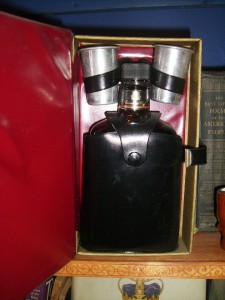 took up a place of honor on my bookshelf, and became quite the conversation piece. When I go a little older, I refilled the bottle with Canadian Club, and even used it as the centerpiece of one of the best scenes of one of my favorite Dinner Theater Shows, “One Crazy Mystery”, a show I wrote and produced when I had my StarDust Productions Mystery Theater. In the scene I (a crazy jazz-playing hipster) and my nurse, (the  young & sexy live-in kind) play a drinking game using this book as part of the gag. Of course in the show, I replaced the booze with water…except for one show where I switched it back to booze without telling the nurse! Lemme tell ya, that wasn’t just One Crazy Mystery, it was one crazy show!

I’m always on the look out for crazy fun stuff like this…if you have any, send your story and pix to mack@tikiloungetalk.com and I’ll post it!

4 Replies to “Like Mad Men? Here’s something Don Draper would have on his bookshelf”