Don’t be a four-corner square, Jack. You want to know what all the Cool kids are doing? They’re hip to COOL Magazine, America’s Coolest Teenage Rag! 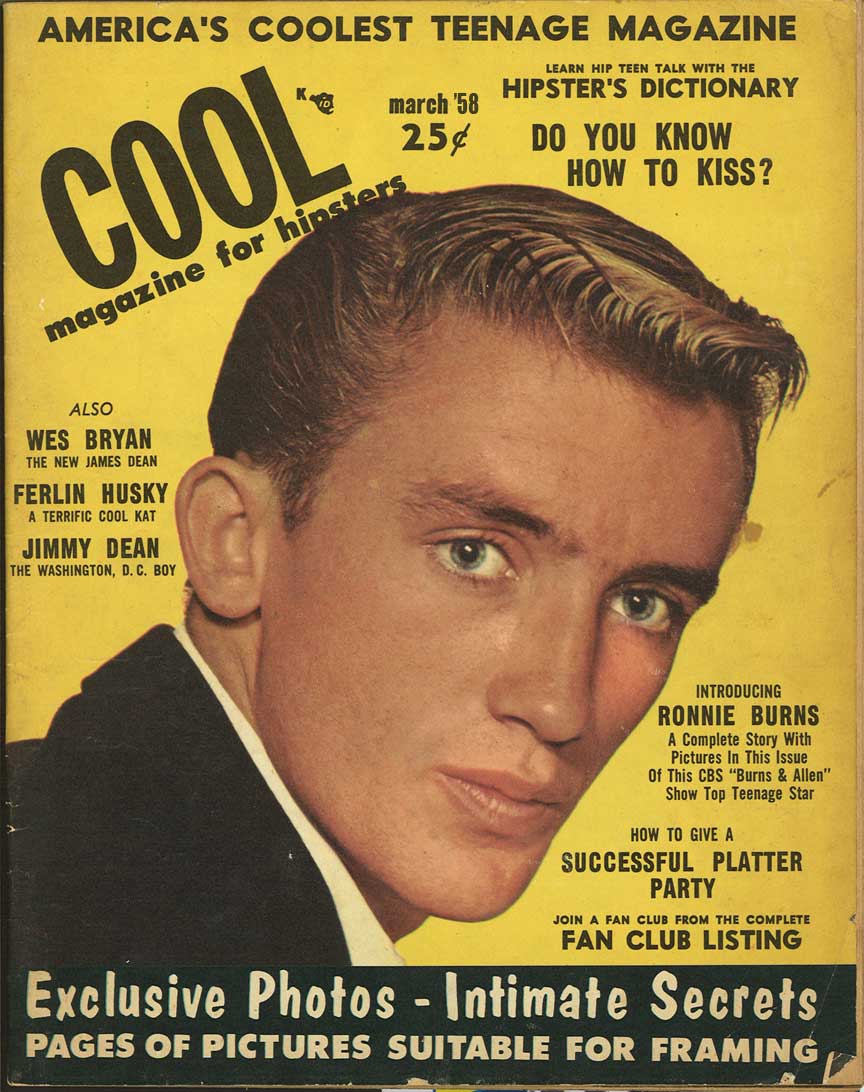 COOL Magazine, 1958. Don’t be a turkey, click on the snapshots to peep them nice and big

This copy my Mama bought new in 1958. It features a spread on George Burns’ son, Ronnie, plus Platter Party ideas, cool threads for tigresses, and a scribble on how to lay down a kickin’ kiss.

But my fave part of this rag mag is the Hipster’s Dictionary. Man, any zotep zombie can be a real keen jelly bean if they read this magazine! Just memorize a few hip phrases like “let’s buzz around the barrel” (let us partake in the eating of food) or “Let’s take a treat on the main beat” (let us congregate where all the ‘in’ people are) and you’ll go from a moldy-minded miser to a zoolie hipster with the most in a flash, Jack! There are several pages from A to Z of hipster lingo, plus a few columns of phrases so you’ll be really in the know.

Now, I want you kats and kittens to knock me your peepers for a few ticks, while I lay down this jazz. And when you get to a mugshot you dig, click on it, and it will blow up to actual size so you can read the feed without flippin’ your wig, dig? 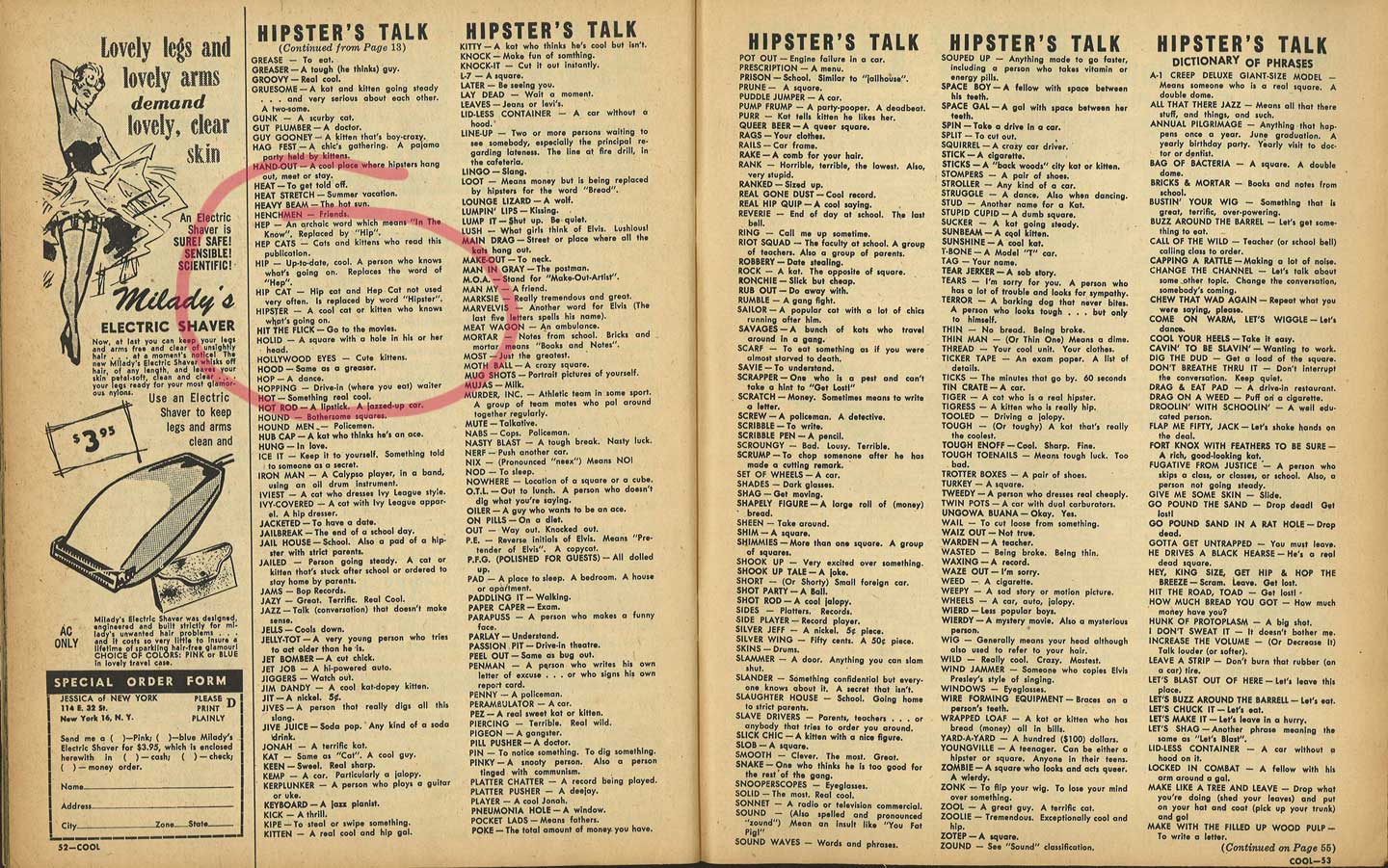 There are a lot of kats who zonk out over hip, hep, hep cat and hipster. Well, here’s the definitions straight from the source, the Cool Mag Hipster’s tome from 1958:

“HEP: An archaic word meaning “in the know”, replaced by “Hip”.

HEP CATS: Cats & Kittens who read this this publication*

HIP: Up to date, cool. A person who knows what’s going on. Replaces the word “Hep”.

HIPSTER: A cool cat or kitten who knows what’s going on.”

So, essentially, you’d be a real Hep Cat for reading COOL magazine, and that would automatically make you hip, but a Hipster would never be called Hep because he’d be too hip for hep, are you hip to this jazz? Groovy. So what that means is that even in 1958, swing-era Hep Cats were still considered cool Jives. And since jive changes with the ages, we kool bachelor-pad-type hot-roddin’ Tiki bar-boozin’ Swingers can feel free to lay down our riffs with hip, hep, or whatever the hell we want without flippin’ anyone’s wig, dig? Fantabulous! 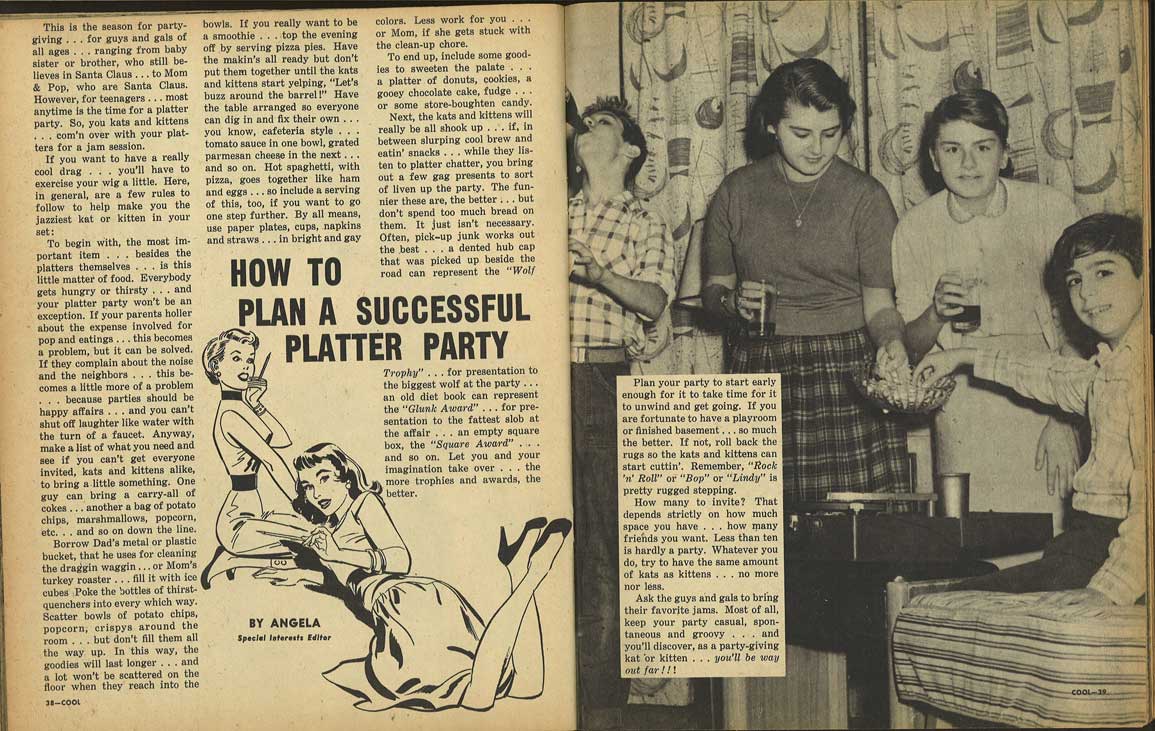 Now, I know all you kids out there really want to have a cool party like the one in the photo, with your beer-guzzling teenage brother (on the left) and funny-looking nine-year-old cousin who whines a lot. Well, our prayers have been answered. Angela, the swingin’ tigress Special Interests Editor at COOL Magazine, has laid down a scribble with all you need to know. She hits on such important subjects as having hot spaghetti with your pizza, giving little prizes like dented hubcaps, and making sure you have plenty of groovy records of Rock ’n’ Roll, Bop & Lindy to dance to. She is also very sure to pepper the article with lots of jive terms from the Hipster’s Dictionary. Imagine that! 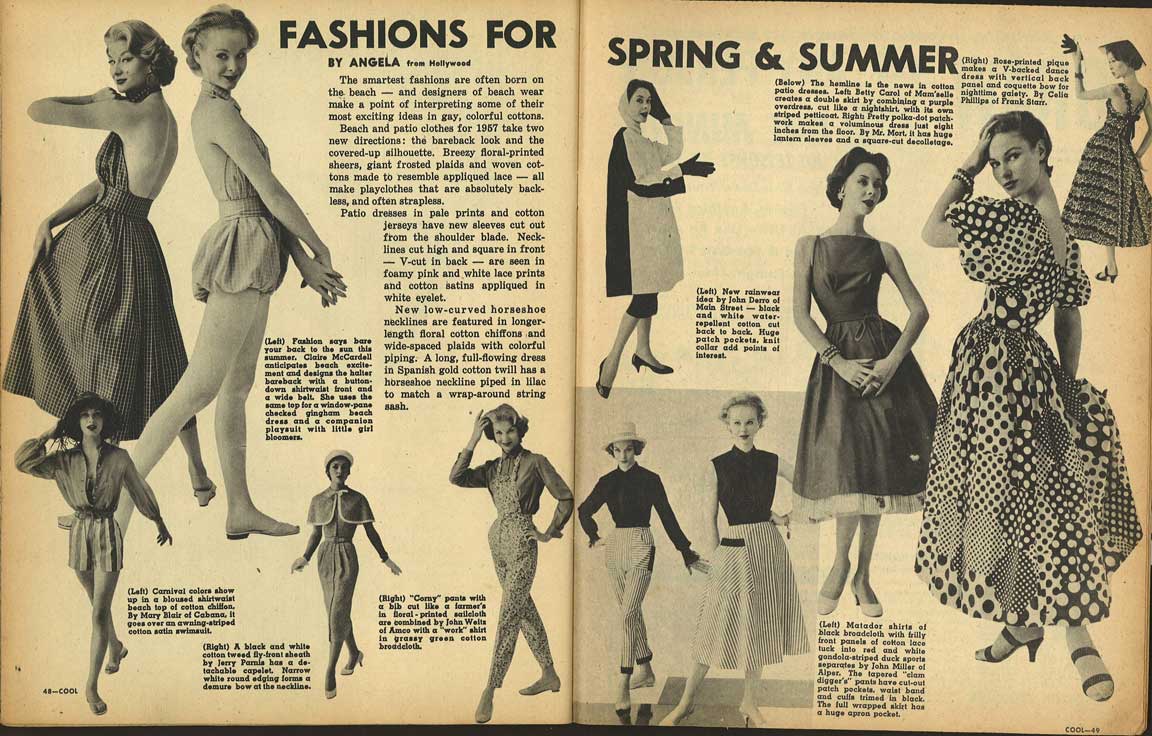 Those of you who are into retro and vintage clothing will flip for this. Our friend Angela once again graces us with her far out knowledge of what hip kittens want. But this time she drops the jive and writes like she’s got a byline in Harper’s. In fact, the whole spread looks sorta out of place in this rag. You’d think COOL Magazine would have spread with dolls dressed in Capris and off-the-shoulder tops, or blue jeans and leather jackets. Or black sweaters and thigh-high boots. Or, I dunno, leopard leotards. Anyway, if you click on the image you can blow it up to read all about it. Can you say “early product placement”? 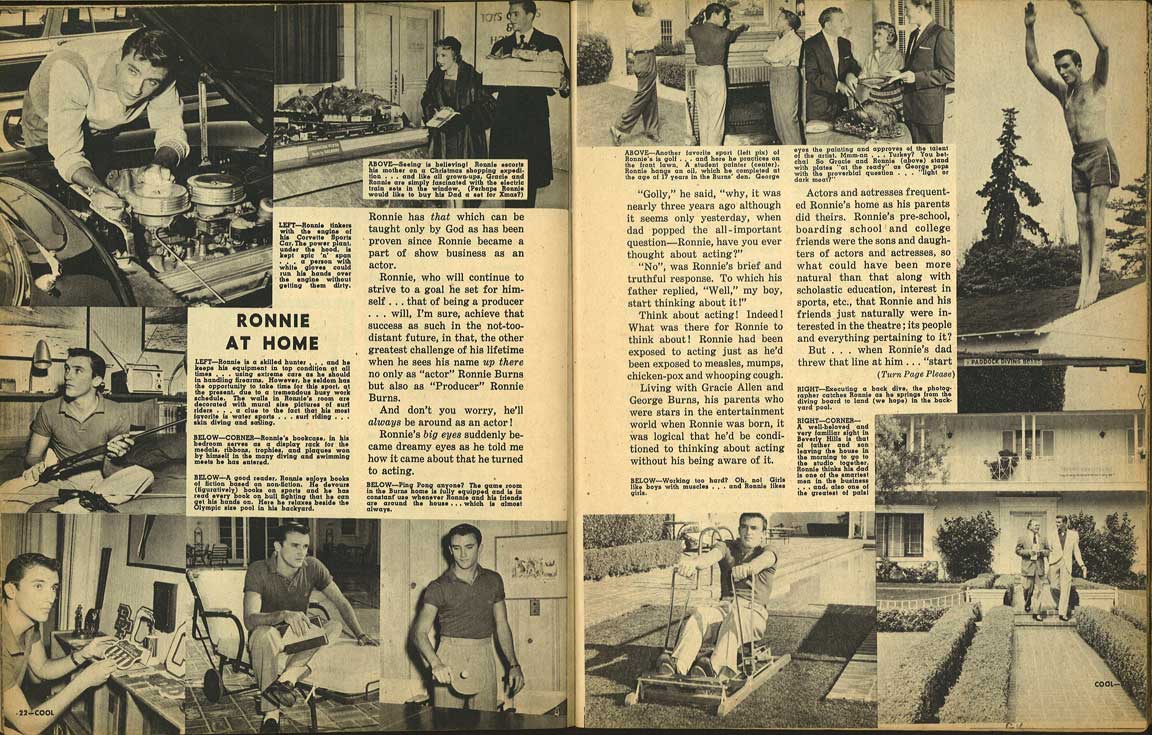 This kid actually got a 16-Page spread in this issue of COOL. Imagine one star getting that much print today, huh? Especially since he was an aspiring star, the son of George Burns and Gracie Allen. (If you don’t know who they are, well, you better Google ’em). Even with all this press he never really made stardom, but he gave us a great bunch of pix that show how a cool boy of the late 50’s should be. See him working on his Corvette sports car (I suspect that’s the first time he saw under a hood in his life), clean his gun, read on the patio, swim, play ping-pong with his shirt nicely tucked in, and go Christmas shopping with his mother…just like…eh…all the…um…cool kids…yeah. (Why ain’t he smoking?) 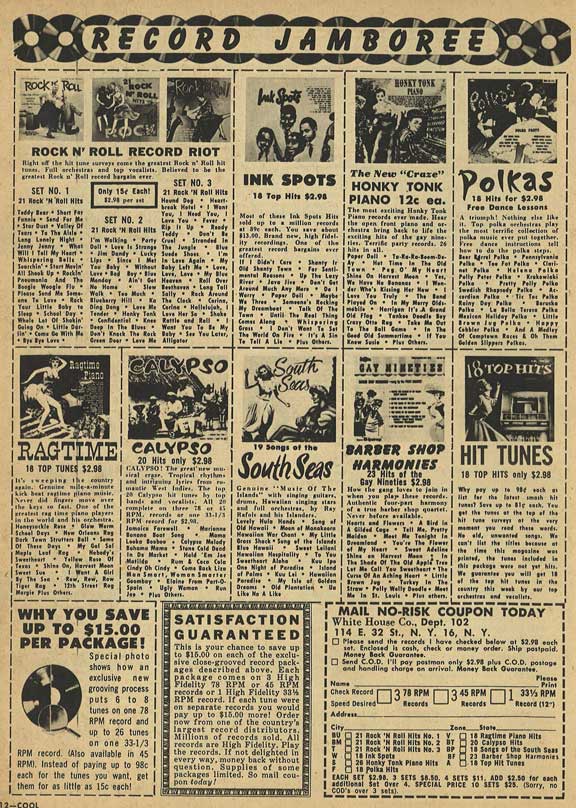 This rag is riddled with ads, as you might guess. Of course Marketing was in its baby stages in the ’50s, so they still didn’t really have the whole “We cater to the teenage crowd” mindset just right, just yet. 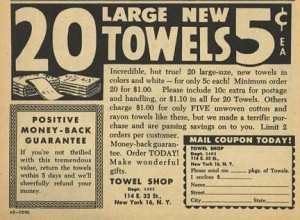 This allowed for fantastic placement of ads for things like “Record Jamboree”, featuring hit albums of Polkas, Honky Tonk Piano, and Ragtime…you know, the stuff hip teenagers love to listen to. Or maybe the ever-popular “20 Towels for 5¢ Each”; that’ll have the kids sending cash and stamps by the handful. Of course there are a few ads that make sense, like those for losing weight (even in the ’50s) and subscribing to one or more of the publisher’s mags. Then I came across two jewels, two ads that made my day. The first was an ad for the “Magic Art Reproducer”, the second for “40 Model Cars”. I flipped like a burger when I saw these, because, in my collection of junk, I have these little trinkets, on display in my home. I don’t have all 40 of the bouncy rubber cars, but I have the caddy that’s in the ad. It’s times like this – going through a 50+ year old magazine that my mother kept all her life and gave to me, then finding ads for stuff that was fun, cheap stuff then, but are hard to find collectibles now, and knowing I have some of that junk (some of those toy cars I’ve had since I was a kid, and they were old then) – it’s times like this that I just have to sit back and say, “Wow, baby. That is some far out, frantic jazz.”

Ad for the Magic Art Reproducer, and the actual one I have at home. 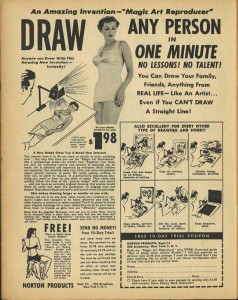 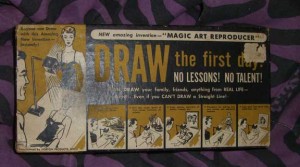 Ad for Rubber Toy Cars, and a shelf in my home with six of those cars. 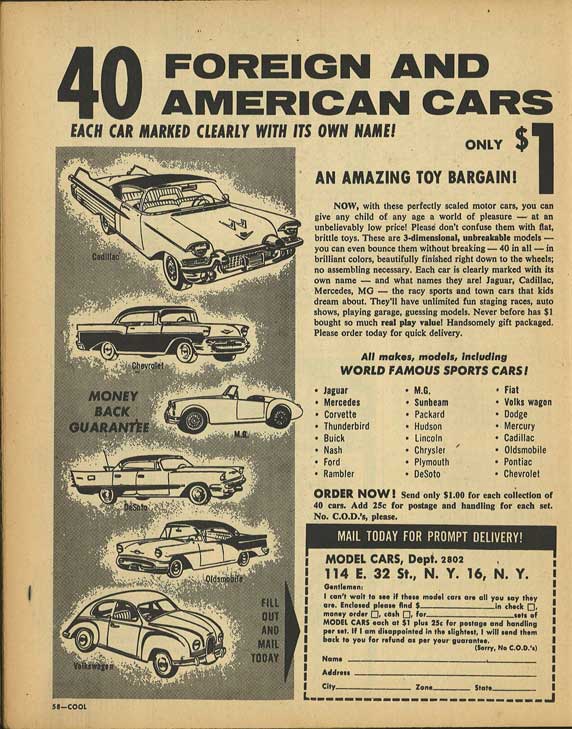 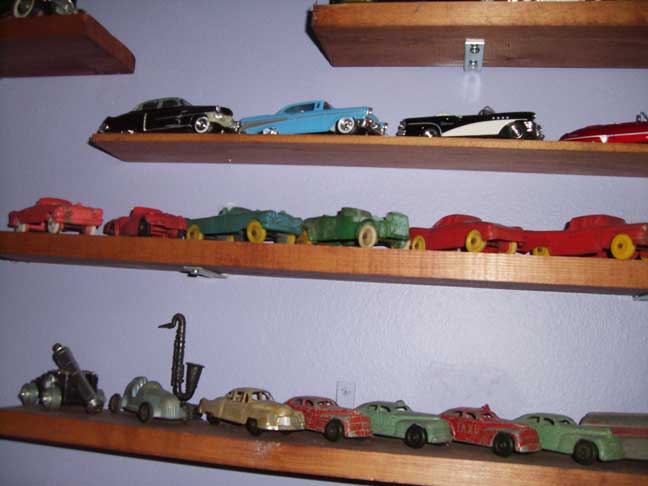