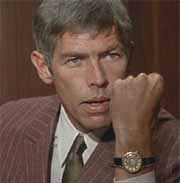 Well, it’s called Mod Movie Mondays at the Tiki Bar, and it don’t get any more mod than this!

Are you hip to the swingin’ scene I’m laying down before you? Are you ready to get in the groove, and swing with the koolest kats and kittens in the galaxy? Are you ready to leave Dullsville and climb aboard the Mod-A-Rama express? Pull up a bean bag and get ready to be experienced with the grooviest, the ker-raziest, the most swinginest spy to make the scene…Derek Flint, the United States of America’s answer to to the Queen’s James Bond.

James Coburn stars as Flint, the Renessance man/genius/karate expert/woman charmer spy who is, without doubt, the most unbelievable man in the world. He knows karate, designs and builds his own spy gadgets, and has a half a dozen groovy 60’s chick girlfriends living with him in his mod pad. He even speaks dolphin. And he always gets the bad guy. Or girl.

Not really sure why there were only two Flint movies, ‘Our Man Flint’ in ’66 and ‘In Like Flint’ in ’67. Maybe they were too Mod for the masses. Maybe they were too groovy to make the gravy. Maybe they were just a little too cornball, even for the ’60s. Whatever the case, After I first saw “Our Man Flint” years ago (by mistake, flipping through channels caught it on AMC back when they actually played old movies, without commercials) and fell in love with the whole idea. Apparently I wasn’t the only one…The Flint movies were to become the main fodder for Mike Meyers’ “Austin Powers” series. Hell, the cat even watches “In Like Flint” in one the AP movies! Watch the Flint Flicks, then watch the first two Austin Powers…you’ll see the inspiration, from the Fembots to the sound his two-way communicator makes. (Yes, ok, sure, Austin Powers movies’ plot lines are pretty much taken from 007 flicks and Matt Helm, but look for the details) 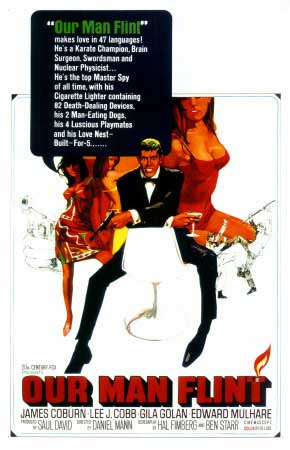 Watching this flick will really take you back to another time, a time lost in recent history, never to be seen again. The sets are so psychedelic you’ll think you’re on acid. The women are 1960’s sexpots galore. Even the restaurants are cool.

The best way to dig this movie is with all the lights off and a couple of sand candles glowing softly. Burn some incense and dine on Welsh Rarebit and toast point while sipping burgundy wine, or serve Seagram’s 7 Manhattans and Wild Turkey on the Rocks (Flint is All-American, so British Gin and Russian Vodka is strictly off the list for this gig!)

I hope this little rap has turned you on to some swingin’ fun. ZOWIE!

3 Replies to “OUR MAN FLINT – Mod Movie Mondays at the Tiki Blog, Baby!”