Sky Captain and the World of Tomorrow, 2004

Beautifully created Art Deco sets inspired by the work of Norman Bel Geddes (of 1930s World’s Fairs fame) transport you back to an alternative history, a 1930s New York where retro-futuristic technology co-exists with fat-fendered cars, where ray guns are real and Nazis are more interested in flying luxury airships than conquering the world. So if Nazis aren’t the nemises in this pre-WW2 adventure, who is? An evil scientist, of course, played by Sir Lawrence Olivier (yes, he was long dead at the time this movie was made – they made fantastic use of B&W archive footage!)

Sky Captain is an airplane pilot who flies a modified P-40 fighter (it not only flies, it’s a submarine). His mission is to protect the world, basically, from anyone who tries to crack things up. When a small army of giant iron robots lands in the Big Apple and start tearing things apart, Sky Captain swoops in. The story progresses from there in a 1930s comic book-style and takes him to exotic lands like Shangri La. 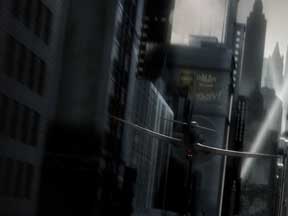 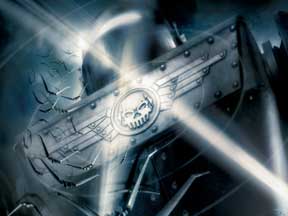 But enough about the story, time to talk about why this flick is being featured here. As I said, the sets are incredible – works of art in every scene. And almost none of it was real – this was one of the first full-length movies to be filmed almost entirely in front of a blue screen, with all of the sets digitally sequenced in. Some sets came from actual photographs, some from vintage art, and the rest were created electronically just for the film. What this translates into is a work of art on a moving canvas living behind the action of the actors. If you like the retro life, you will wish you lived in this movie. 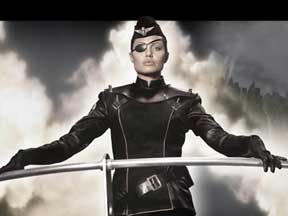 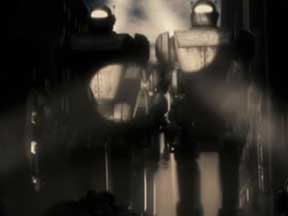 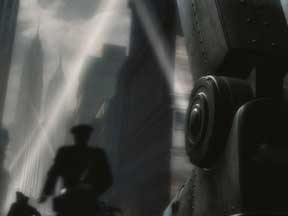 Since the action takes place mainly in 1930s New York of the Future, I’d suggest a retro-futuristic dinner and drinks. Try a deli style sandwich platter of corned beef, roast beef, Swiss or Havarti cheese, and coleslaw on marble rye, served up on your favorite Jetsons-style dishes with a side of waffle fries. For dessert, Dove chocolate ice cream banana splits in Art Deco, blimp-shaped bowls. And for the drinks – Highballs, Slow Gin Fizzes, and of course, Manhattans, served in your finest futuristic stemware. 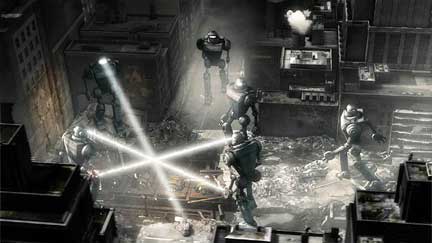 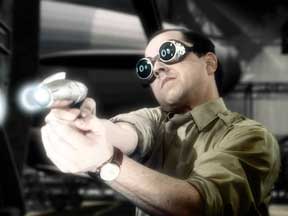 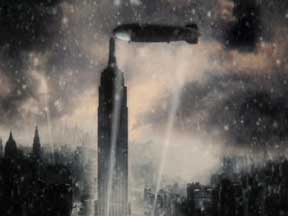 2 Replies to “Mod (Retro) Movie Monday: Sky Captain and the World of Tomorrow, 2004”