OK, let me start off by saying I usually rap about very kool movies, old movies, mod movies or bad movies that are so bad they’re fun to make fun of. This flick doesn’t fit into any of the above. In fact, as far as movies go, it’s pretty dumb. BUT… 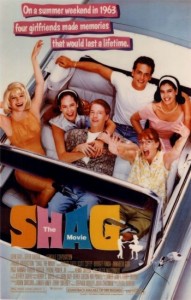 Is worth watching for two reasons: One, the cars, clothes, music, dancing, buildings and furniture are all really dead-on representations of what 1962 America was really like; and B) Phoebe Cates at 27 years old, playing a teenager.

The story is simple: Four young girls on a last wild weekend before going off to college (or getting married, as in PC’s case). The story is absolutely predictable from the minute the first chick climbs into her rich mama’s band new ’64 Caddy Convertible and gives away the whole plot of the story – she and her groovy friends are ditching the family visit to spend a few days shagging in Myrtle Beach (Shag is a dance,by the way). 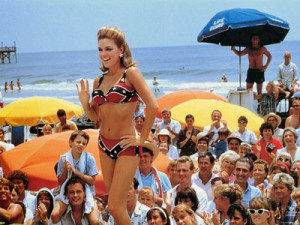 The characters are as predictable as the story: One uptight, snooty one, one over-sexed blonde aspiring starlet, one sweet, shy innocent type, and one confused girl who is “wilder” than she’s pretended to be. Add in an Elvis wannabe, an sleazy agent, a strong-silent tough guy etc etc aw hell you get the idea.

Ok, now to why I’m highlighting this dog. CARS, Myrtle Beach looking like it did in the 60’s, Bikinis, CARS, hot chicks, Mid-Century Modern Hotels, houses and furniture back when it was just ‘Modern’, CARS, Music, dancing and CARS. Did I mention the abundance of kool cars? 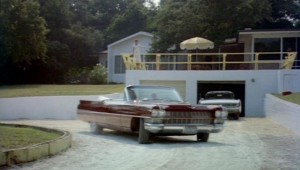 The Shag Contest (a sort of excuse for the movie) is held at the now extinct Myrtle Beach Pavilion, one of those old-time shore town amusement piers with a hall suitable for dancing and concerts.

There are also plenty of shots of Bridget Fonda wearing some pretty skimpy stuff, so, yeah. 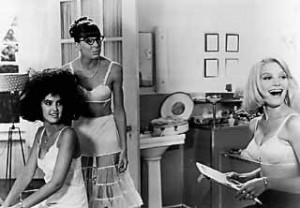 It’s a lot of fun seeing all the old stuff  and imagining yourself back in the time. Just don’t expect a great story. This movie is all about taking a look at a time long gone, days when a Caddy Convertible was better gold and the music was boss.

Juice & Chow: This is an easy one. Burgers, fries, dogs, chips and cones. Milkshakes for starters and later on cheap whiskey, gin or rum right out of the bottle. Or, you can do what they do in the movie – get an old wash tub, and fill it with juice and every kind of alcohol that exists.