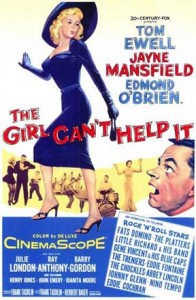 What do you get when you mix sexy Miss Jane Mansfield with a dozen early Rock ’n’ Roll legends? You get

The plot is simple but fun: Old gangster wants to make his ‘girlfriend’ a star, but she can’t sing a note. So he hires a press agent, Tom Ewell (the luckiest man in Hollywood at the time by the way) to force her fame. Since she stinks at singing traditional music, they give Rock ’n’ roll a try.

This kookie movie features some of the most famous & koolest Rockers from the 50s, actually performing in the movie in glorious widescreen color. The list includes:

Plus a haunting, unforgettable version of Cry Me A River by Julie London. 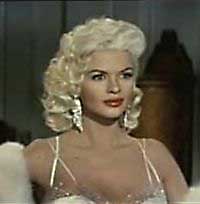 Add to that some kool cars, and Jane Mansfield wearing some of the tightest clothes ever built and you’ve got a winner. This movie pretty much proves she gave Marilyn a run for the money. Such a drag that she died so young. At least we’ve got the film.

Oh, yeah, why was Tom Ewell the luckiest man in Hollywood in the 1950s? Simple. Love scenes with Marilyn Monroe in The Seven Year Itch in 1955, love scenes with Jane Mansfield in The Girl Can’t Help It in 1956. Ya dig? 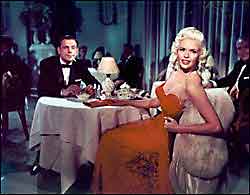