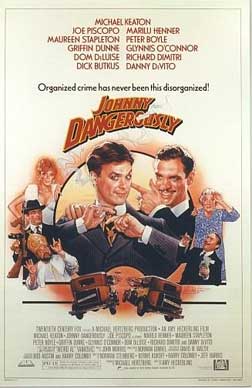 It’s too new to be a mod movie, but it is retro, so what the hell, it’s one of the silliest, funniest movies I’ve ever seen, so here goes…

With a cast like that, it can’t miss! (Well actually it did miss; it was considered a box office flop. I don’t know why. I thought it was funny as hell then and it’s still funny now. I guess those

sophisticated 1980’s audiences were too high-class for such a silly flick. Ya know, the ones that dug such award-worthy movies as Ladyhawk and Summer Lovers). Anyway, if you haven’t seen it, and you like to laugh, give it a whirl.

What can be funnier than a spoof on gangster flicks, with cartoonish hitmen, sleazy flapper dames and a foul-mouthed parrot? Not to mention this movie crams in more old-time sight gags and jokes than should be allowed in 90 minutes. This includes a classic “grapevine” where the end message is totally different from the beginning (Johnny and the Mothers are playing Stompin’ at the Savoy in Vermont tonight), and a line that’s still recognized and quoted today: “You shouldn’t grab me Johnny. My mother grabbed me once….once.” And of course, this is the movie that originated “You farkin icehole”.

There’s some fun music in here too (Marilu Henner does a nice job slinking around a piano on the song “Dangerously), plus a theme song by good old Weird Al.

The story? Oh yeah, I guess I should tell you something about that. Johnny Dangerously is a gangster who is known to his  little brother and mother only as a famous nightclub owner. Things get complicated when Johnny’s brother  decides to work for the DA’s office, to fight crime. Johnny decides to go legit (le-what?) but the other gangster have other plans. A cigarette case full of gum, puppies getting tagged with a pricing gun, a film on “Your Testicles and You” and a year of shirts all factor in. Believe me, after seeing this flick, you’ll be quoting it for years to come.

(Without doubt, the best lines are Joe Piscapo’s as Danny Vermin:

Danny Vermin: I got something to stop him.
Dutch: They made it for him special. It’s an eighty-eight Magnum.
Danny Vermin: It shoots through schools.

Danny Vermin: I enjoy collecting protection money, putting whores to work, loan-sharking. I enjoy planting bombs in people’s cars. These are a few of my favorite things.

I loved this movie so much when it came out that I saw it on video 16 times. Yes, 16 times,

mostly while showing it to friends who hadn’t yet seen it. I was in high school at the time, and we just happened to be performing a comedy play in which I played a gangster. We borrowed heavily from this movie and added the gags into our play. Later I would borrow some gags again for my dinner theater, StarDust Productions. Yeah, it’s that funny!