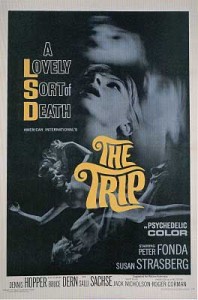 The Trip is a not so much a movie, as it is an 85 minute LSD experience. It was Hollywood’s attempt (one of many) to give the squares a taste of what being on acid was all about, good or bad. It even starts with a DISCLAIMER warning everyone that they might not like what they see, and that (say this with Mr. Mackey’s accent) ‘druhgs are bay-ed’.

Nevertheless The Trip is a fun psychedelic movie to watch, because it’s like a time capsule back to the hippy-dippy days of the late ’60s, when the generation gap was at its widest and the country was split between young baby-boomers trying to find the meaning of existence, and the old guard just happy that WWII was over and their Fords ran great. The main theme of the flick is that even uptight corporate squares (Peter Fonda’s character) could find the true meaning of reality (almost scientifically) through the magic of mind-altering drugs. 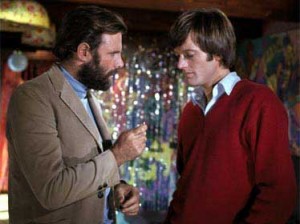 There are groovy ’60s pads, groovy ’60s chicks, groovy ’60s music and all kinds of crazy stuff going on. By the end of the movie (if you make it that far) you’ll actually feel like you’ve been on a trip (or at least I felt as close to one as I’m ever gonna get). Oh, and in one scene, there’s a fondue pot that’s exactly like the one I have. Just wanted to toss that in.

According to most accounts, Corman, Nicholson, Hopper and Fonda all took LSD “to prepare for the movie.” Mighty dedicated to their craft, huh?

I’ve got no idea what to suggest for drinks & snacks with this flick. I dunno…waffles with faces made of strawberries and whipped cream, so you can imagine them coming to life and eating you? No clue. You decide. Here’s a clip to help you get in the groove, diggit?