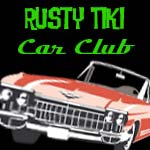 One of the things about being into the retro scene is that you pretty much have to have a vintage car, or at least you’ve got to have a strong desire to have one and maybe a few pix of your dream machine tacked to your office wall.

Well, I’ve got the real deal, and let me tell you, unless you’ve got a bag of lettuce to throw around and let some other poor sap do all the work for you, owning a 57-year-old Dee-troit casket can be the cat’s ass, or it can be a pain in the ass.

Case in Point: This week I decided to finally, after putting it off for 20 years, replace the brake master cylinder. In case you don’t know, that’s the main gizmo that makes the car stop. Mine’s had a leak in it since day one, back in May of 1990. I did a lot of work on the brakes over the years – new wheel cylinders, new brake drums and shoes, new rubber lines – but haven’t wanted to do this particular job because A) the MC is located UNDER THE FLOOR of this particular model and B) I knew it would be hell trying to change it out. Well, after realizing my 57-year-old brake lines were so rusty the car was basically a rolling death trap, I decided it was time to replace the entire hydraulic system. That means new lines, new wheel cylinders…and rebuilding the master cylinder.

I shopped around and got all the parts I needed for around $160, believe it or not. Retail, if you just buy them from the main guys, these parts are around $600. It pays to shop around, kids. The front wheel cylinders went on easy. But the master cylinder…oof. I had to jack the front of the car up 15″ and put it on jack stands. Then I had to crawl around under the thing, with 50+ years of rust, dirt and leaking brake fluid falling on my eyes. The MC was mounted up on the frame, under the floor board, with only a few inches of space to get around. (Sure, I could have cut the floor out, but that would be even MORE work). The clutch and brake pedals are actually attached to the MC, so I had to beat those off, disconnect a bunch of stuff, and work the MC out between the frame and the exhaust pipes. That took, I dunno, 3 or 4 hours on and off of beating, bending and wedging, all while upside down under the car. Once off, I had to get a friend with a 2″ long wrench to get the end-nut off of the master cylinder body, frozen there for almost 60 years. Once that was done, rebuilding it was a piece of cake, thanks to fairly easy instructions found in the original 1953 Chevrolet Service Manual I have (best 20 clams I ever spend, next to that stripper in Key West).

Getting it back on was a bear, but not as bad as taking it off. I had to bang a few things around, but hey, cars built in 1953 could take. They were made of that good, post-war steel that was part recycled army tank and part melted steam engine. I got everything back together, tested the pedals, everything back to normal. Except some spring fell off from somewhere, and I’ll be damned if I know where the hell that sucker goes…

Anyway, now I’m waiting on the brake lines and the rear wheel cylinders so I can finish the job. This means some more crawling around under the car, but not nearly as bad as the MC job. The worst is over. Soon the brakes will literally be ‘as good as’ new, and I’ll be able to take the Chevy out on a 20th anniversary victory lap!

One Reply to “Working on the 53 Chevy Hot Rod”