Finally after almost seven years off the air as a series, FUTURAMA is back on Comedy Central. 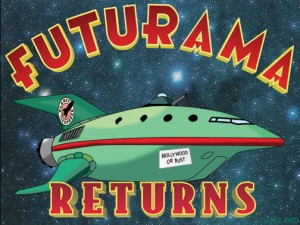 If you dig Futurama you probably already know that the new series will premier with a one-hour special on Thursday, June 24 at 10:00 p.m. From the Official Futurama Site: “After a devastating spaceship crash, the Professor attempts to resuscitate the crew with his birth machine. Later, Leela and Zapp Brannigan find themselves stranded on an Eden-like planet.”

For you retro kats & kitties who aren’t hip to this fantabulous show, knock your peepers to this: Futurama (The name taken from the General Motors exhibit at the 1939 New York World’s Fair) is a krazy mix of mid-20th century sci-fi, current-day tech and the world of tomorrow, tomorrow being the year 3000 (or so). The plot is simple: Fry, a bumbling but sort of lovable (most of the time) pizza delivery boy (man) accidentally (sort of) gets cryogenically frozen on New Year’s Eve as the world is about to turn the date to 2000. After 1000 years he’s thawed, welcomed by a goofy scientist who yells “Welcome to the world of tomorrow!” (sound familiar?) He meets a sexy cyclops, a partying robot and eventually his great great (etc.) grand nephew Professor Farnsworth, (who is a mad scientist six or seven times Fry’s age), who just happens to own an inter-planetary delivery company. There’s a lot more, but you’ll have to watch the show for that. 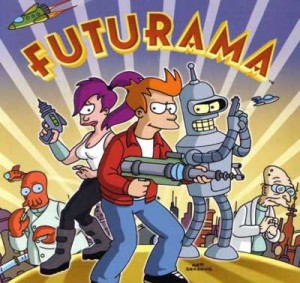 What’s really groovy is that Mat Groening’s (Yes, The Simpsons guy) idea of the far-out future is far-out indeed, filled with 1950s-style sci-fi monsters, aliens, spaceships, and educational films. The hovercars all have fins and chrome, most of the sound effects are made with a Theremin or are lifted from Star Trek TOS, and the TV sets look like floor-model Zeniths that would have been in your grandmother’s pad. 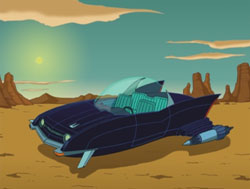 So check it out. It’s as clever as The Simpsons with the added value of that retro flair.

-Tiki Chris reporting from in front of the 65″ RetroVision,  with an Atomic Cocktail in hand.