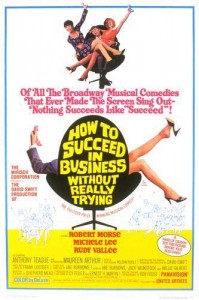 In honor of Sunday’s Season Four Premier of Mad Men, I thought I’d treat you swingers to a little fun flick from 1967…based on the Broadway musical, here’s

How to Succeed in Business Without Even Trying

from 1967 starring a young and crazy Robert Morse as J Pierrepont Finch.

When I first watched Mad Men four years ago, the one person that really clicked in my head was Cooper. He had a very familiar look, especially his expressions. Through the magic of the modern interwebs I was able to do a world-wide search for this actor’s previous accomplishments (Ok, I went right to IMDB) and realized I had recently seen the kat in How to Succeed in Business!

Man, what a great circle of events. Robert Morse originated the part of “Ponty” in HTSIBWET in 1961 and won a Tony for best actor. When the movie came along he, along with Rudy Vallee, Ruth Kobart and Sammy Smith all recreated their roles from the Broadway version. His character starts out as a window washer who, with the help of a book entitled, “How to Succeed in Business Without Really Trying” decides to take a shot at climbing the corporate ladder. Executive is written all over his future, and his goal is to someday run the company.

Change the timing by 30 years, and it becomes very easy to see Cooper’s character starting out with some of the same characteristics, basically making his character in How To Succeed a possible background (although a goofy one) for Burt Cooper. (What’s really funny is how the film treats the Advertising Department and its stigma at the company).

Basically, it’s a very kool connection for the retro series Mad Men to make by hiring an actor who actually portrayed these types of characters at the actual time this series takes place. Dig? 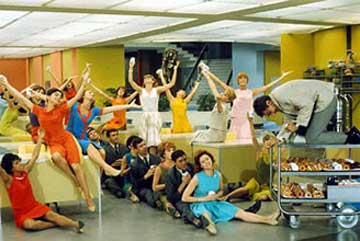 As for the movie itself, what a fun flick it is. It’s a musical with some swingin’ tunes. The sets are fantastic…more early-60s style than late. Ultra Modern and swanky-galore. Since it was originally staged in ’61, the movie maintains that era’s look and feel.

There are a lot of laughs, and by the end you’ll be hoping the kid makes it. When it’s over, watch a first season Mad Men and you’ll see a few cues from this movie. The kids that put this series together definitely watched this flick once or twice!

3 Replies to “For The Mad Men Lovers: How To Succeed In Business Without Even Trying, 1967 for Mod Movie Monday”