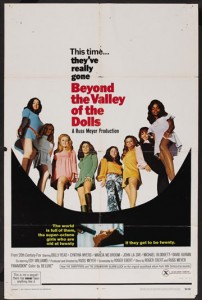 Here’s a truly Mod movie for Mod Movie Monday…What do you get when you mix late ’60s Hollywood with stacked chicks, Russ Meyer and a young Roger Ebert? Just what you’d expect…a classless, confusing, wild and oh-so-fun-to-watch flick with a cast of hot chicks and a good old fashioned X rating.

Beyond The Valley Of The Dolls 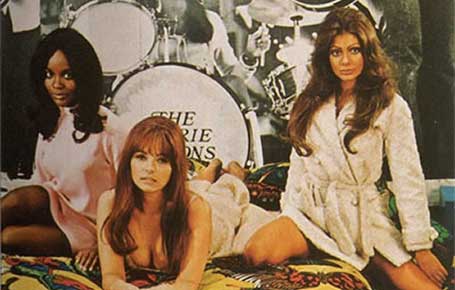 I’m not even going to try to explain the plot of this movie beyond four hot, mod chicks in a rock band decide to head out to LA to make it big, and everything goes nuts from there. The girls get naked a lot. There’s ’60s-style lipstick lesbian sex. Kool cars. Drugs. Music by the Strawberry Alarm Clock. Crazy swingin’ Hollywood parties. Styles, decor and music that will send you far out, baby. It’s the scene. It’s also funny (intentionally) and has some wacky, out-there scenes (especially the ending) that writer Roger Ebert (yeah, the thumbs guy) and director Russ Meyer cooked up on-set.

(Funny note: Russ Meyer didn’t know the film was getting an X rating, which is pretty much equivalent to an NC-17 today. He said if he’d known it he would have added a lot more sex and nudity to the film). 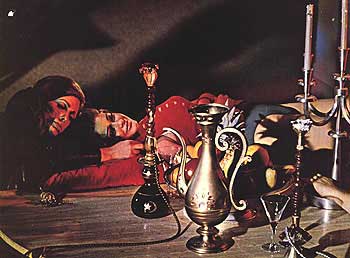 Dinner & Cocktails: There’s actually a drink called LSD, which I think is fitting for this flick:

Sounds kinda disgusting, but who knows. Maybe it’s better if you do the real LSD first. As for food…anti-establishment all the way! You have to fight the man…the chef..man…and go against the grain of society to make your own voice heard, baby…put a hot dog on a hamburger bun…eat your steak with your hands…radical ideas like that. You know where I’m comin’ from, brothers and sisters. Lay down that groovy flower power. Or something.

Anyway while you’re enjoying your hippiefest I’ll be at the Tiki Bar having a Zombie. Later kids!

-Tiki Chris P, like, sitting in the center of the cosmos, listening to sitar tunes and watching the pretty swirly colors of the tropical flowers.