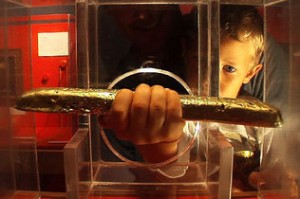 It’s a drag when someone breaks into a museum, busts up a display and steals a $550,000 gold piece of history, probably to melt down and sell for booze, gas and grass. But when it happens to be a gold bar from a 300+ year-old Spanish wreck in Key West, Florida, well that’s a whole other story.

According to this article in the South Florida Sun Sentinel, two thieves entered the Mel Fisher Maritime Museum, broke the thick acrylic case surrounding the real gold bar and made off with it in the night. The bar was on display in a special enclosure that allowed people to lift and hold the bar, so we could feel the weight and history of it. (I held this bar myself a couple of years ago while on a KW trip). The gold bar was salvaged from the wreck of the Santa Margarita, a Spanish ship that went down off the Keys during a hurricane in 1622. The bar was recovered in 1980 and has been on display for more than 20 years. 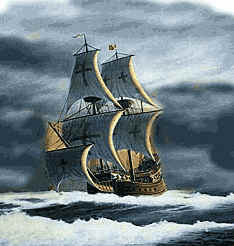 Then along came two pirates. I call them pirates because A) these kats didn’t knock over a gas station, they went after treasure, treasure from a Spanish ship that sailed during the heyday of pirates. GOLD treasure. If two real pirates came back to life as zombies, they couldn’t have planned this better. B) It happened in Key West, where a very high percentage of the year-round population claims to either be pirates themselves, or descended from real pirates (or pirate hunters). C) They did it right under everyone’s noses, didn’t care about the security cameras or the alarm, and just took what they came for. And D) because I will bet you any amount of doubloons that there was rum involved.

It is a drag for the museum. Even though they have hundreds (or maybe even thousands) of these bars, it’s still not cool to steal from a place that makes it so much fun for the public to enjoy.

Unless, of course, you’re a pirate.

These guys might be crack-head scumbags. They might be lowlife petty thieves who made a run for the big time. Or they might have had it up to their necks with all the wealth being in the hands of the few while the majority of the world is sweating to make a buck. Who knows. I know one thing: I kinda hope they’re more the Jack Sparrow type of pirates…and I kinda hope they get away with it. At least until the Coast Guard finds their pirate ship and blows it out of the water.

-Tiki Chris reporting from Pirate’s Cove Tiki Bar, in the cavern under the waterfall on Pirate Island.