The Tiki Bar is still dripping with skulls, cobwebs and sticky booze left over from last week’s Halloween party, and time marches on. I realize it is Wednesday, but now that the Big H is over for 2010, I’m slowly getting back into the swing of writing. So, without further ado, here’s this week’s Mod Movie Monday…on Wednesday…at your favorite ole Tiki Blounge. 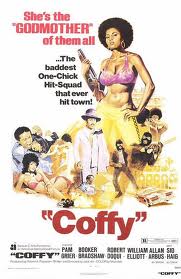 Oh, suguh! Ready for a real 1970’s exploitation film? It don’t get no grittier, no dirtier, no hotter than

Starring Pamela Grier, from way back in funky 1973.

This is one of those flicks that if you get it, you’ll dig it, and if you aren’t hip to it, you’ll hate it. The 1960s and ’70s saw an explosion of ‘exploitation’ films…movies that were generally low budget and made fast, relying on controversial subjects, violence, drugs, racism, sex and nudity to attract audiences. Film makers ‘exploited’ these ideas (and their actors/actresses) to make big profits on low shell-outs.

An entire strain of the exploitation film business called ‘Blacksploitation” gave us movies where the protagonists were African American (politically-correctly referred to as “Blacks” at the time) that climbed their way out of poverty or other bad situations to take control of their lives, clean up their neighborhoods or defend their families and friends. Possibly the most famous Blacksploitation film is Super Fly. One of the most infamous is Coffy. 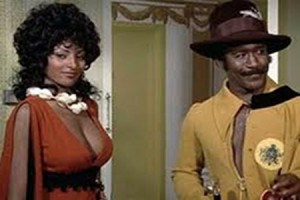 Coffy is your average, innocent nurse just trying to make it in the screwed-up days of the early ’70s. Innocent, until her little sister gets pushed into drugs and gets juiced up with a hot dose of heroin. It’s then that Coffy drops all pretense out on a mission of vengeance and vigilante justice, knocking off drug dealers, whacking pimps, and butchering mobsters who cross her path.

This was a rough film for 1973, and still holds up as a bad-ass flick today. Movies like Machete and Jackie Brown have their roots in films like this (Which is why a lot of kats “don’t get it”), and it’s a sure bet more films stylized in this way will be slithering out of Hollywood in the future.

Food & Booze: There’s a pretty keen scene with a buffet in this flick, not sure what’s on the menu but I think it’d be fun to do a little buffet while watching. As for the booze, the most appropriate would be a…

There are a few variations on this theme. I dig this one:

Brew the coffee and pour into a mug with brandy and rum. Add the condensed milk and stir slowly. Then top with whipped cream, a few dashes of nutmeg and cherry. Add a brown sugar rock candy stirrer if you can get your hands on one. This coffee is hot and smooth, and goes down nice and easy.

Here’s the trailer. You can watch the whole movie, uncut, at IMDB.