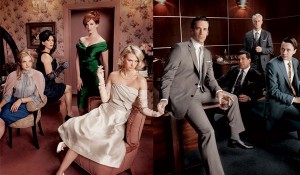 It’s Sunday, and as happens every Sunday my Martini alert goes off in my head and I start thinking about Mad Men. So I looked up the schedule for season five on the AMC website…and it’s blank.

Yeah, blank. A big ole’ gray block of nothing where the schedule should be. That means one of two things: Either my computer is on the fritz and not showing the page right, or AMC hasn’t decided on when they’ll be airing the show. Now, according to the AMC Mad Men blog, Breaking Bad has been pushed off from a Spring, 2011 to a summer premier. That has people speculating that Mad Men won’t be shown until the fall.

The fall? Aw, man, what a drag that would be, ya dig? I guess we’ll just have to wait and see what transpires.

On that note, I must say I’m a little let down that the series has progressed so quickly in its time frame. Not to say I’m not still digging it, but the mid to late 60s is not nearly as kool an era (to me personally) than the 50s-early 60s. To me, personally, the late 60s is when the whole era of kool really disappeared in favor of acid rock, wide ties and social destruction. Oh, certainly a lot of good came out of the chaos; the true beginning of civil rights for all Americans, the eventual end of the Vietnam war, and the Mod movement…but to me, and probably many of you, that era just doesn’t hold the true swank of the Rat Pack/Cocktail set days. But I’ll still watch the show.

If any of you kats & kittens hear anything through the pipeline on when Mad Men is going to air, please drop me a line.

One Reply to “MAD MEN Season Five…where are you?”