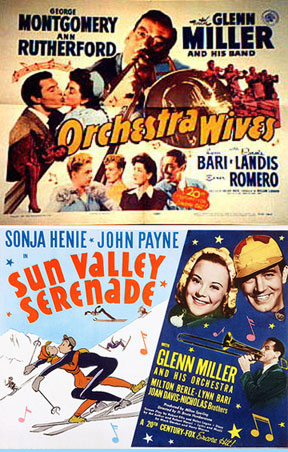 Since it’s nearly the end of Jazz Appreciation Month, I thought it would be kool to spotlight one of the swingin’ kats that helped make Jazz (and Big Band music) as popular as it is today. See, when most people think of Jazz today, they think of the small combo bands of the 50s like The Modern Jazz Quintet or Dave Brubeck’s band. They think of Bop players like Dizzie Gillespie and Charlie Parker, or smooth Jazzers like Stan Getz or modern swingers like Wynton Marsallis. Many people forget that these Jazz greats built on the styles that were created by early Jazz musicians including Duke Ellington, Fats Waller and Louis Armstrong…and that Jazz, as it evolved into the sounds of the Big Bands, was really made popular by the more commercial yet still fantastic legends of the era…Benny Goodman, Count Basie, Tommy Dorsey, Artie Shaw, Glenn Miller… So, here are both of Miller’s movies,  with plenty of 40s Jazz in its original Big Band form:

Orchestra wives is a funny little movie about…you guessed it…the wives of the guys in the band, and how they travel around with their musician husbands. The chicks are catty as hell, the music is hot and jokes are typical of the time, that is to say they’re good. The real actors include George Montgomery, Anne Rutherford, Harry Morgan and Cesar Romero. Songs include the original version of At Last, I’ve Got a Gal in Kalamazoo, Serenade in Blue and Bugle Call Rag, among others. The plot is actually not bad for a movie made to showcase a band, and the added entertainment of The Modernaires and The Nicholas Brothers makes it a lot of fun to watch. What’s kind of funny is watching poor old Glenn Miller (his character’s name is Gene Morrison) try to act. He’s as stiff as a double bourbon.

Sun Valley Serenade was the first of his two movies. This one features ice skater supreme Sonja Henie, John Payne and Milton Berle. The plot has something to do with the band taking on a Norwegian refugee as a publicity stunt…blah blah, watch it for the incredible music and fantastic dancing by Dorothy Dandridge and the Nicholas Brothers. In fact, this flick has the longest, swinginest ever performance of Chattanooga ever. In fact, it was this movie that song was written for…and became so popular it received the first Gold Record ever awarded. Additional songs include Sun Valley Jump, I Know Why and So Do You, and a very swingin’ version (better than the original in my opinion) of In the Mood.

What’s also great about these flicks is that all the music…for the first time for the Miller orchestra…was recorded on magnetic tape, not wax. So the sound is fantastic, full and vibrant, and all the songs from the movies are available on CD, sounding like they were recorded yesterday.

Miller’s band was a big, swingin’, hard-hitting Jazz band that was almost never referred to as a Jazz band. His charts were made for dancing, and even sounded a little corny at times (on purpose…songs like “I want a hat with cherries”). But the real purpose of the band was to swing, and to do it in a very tight, very professional way, with plenty of open areas for soloists to show off their true Jazz chops.

Glenn Miller’s orchestra became, and remains, the most popular and well-loved band of the entire big band era. It’s Miller’s music you hear in any movie that harkens to the 1940s. Songs like In the Mood, Moonlight Serenade, Chattanooga Choo Choo (The world’s first million-selling gold record) and I’ve Got A Gal in Kalamazoo remain some of the most recognizable songs of the last 100 years.

Riding that wave of popularity, Glenn Miller was asked to do some movies in Hollywood, as was the custom at the time. Miller was able to make two full-length features before he signed up for military duty in World War Two. Unfortunately, his disappearance prevented any more movies with the Miller band to ever be made. 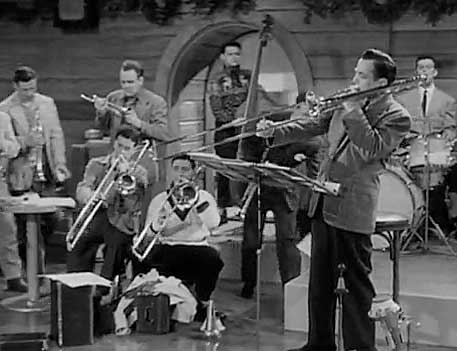 Here’s the full segment of Chattanooga Choo Choo, including the entire orchestra, Tex Beneke on vocals and solos sax, the Modernaires, plus Dorothy Dandridge and the Nicholas Brothers. A side note: It’s a credit to the movie’s producers and Miller that they had no problem with black and white performers in the same scene in a movie made in 1941. A number of southern states refused to show the film because of this, and only showed it after editing out the dance sequence themselves. Man, we’ve come a long way.