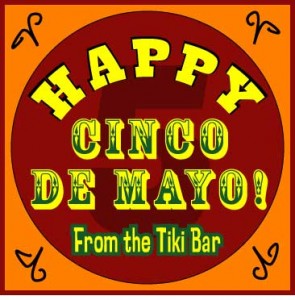 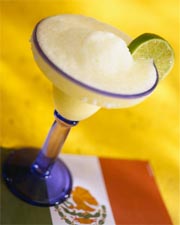 Ah, Cinco de Mayo…another wonderful holiday whose traditions have been lost and reduced to an excuse to drink (My favorite kind of holiday).

While most of the world will be celebrating with Tequila shots and tacos, here at the Tiki Bar we’ll put a little Polynesian spin on things. 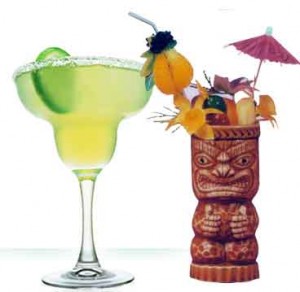 I mean, after all, who says Cinco de Mayo has to be Mexican? I’m pretty sure May 5th happens on places like Easter Island and Maui, too, right? So why can’t we celebrate this arbitrary Wednesday with Mai Tais and Chicken on a Stick?

In true Tiki style, we can bend the rules for this fiesta and make it something our own. Now don’t worry – we can still have Tacos and Margaritas – but with a Pacific flair.

This should really confuse your friends, but will be a snap for you to throw together. Set up the Tiki Torches, make a mix CD of Martin Denny and some of that twangy Spanish polka music you hear at Mexican restaurants, and make your food a combination of Tacos, Taquitos, Chicken Satay and Shrimp Cocktail. Put cheese and coconut on everything. Wear a grass skirt and a Sombrero. Try making Zombies with Tequila, and Margaritas with rum. Do the Mexican hat dance around a Tiki Totem and….

On second thought, maybe this isn’t such a good idea. Forget it, I’m going to Taco Bell.

– Tiki Bandito Pinto, from the Tiki Bar in the Desert

4 Replies to “Happy Cinco de Mayo from the Tiki Bar!”