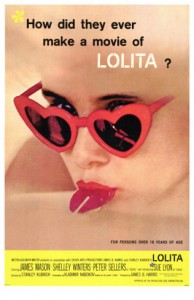 Get a new suggestion for an old movie every Monday at Tiki Lounge Talk.

This week we venture into the slightly disturbing yet engaging mind of Stanley Kubrick, with his first independent film,

For those of you who don’t know the original story of Lolita, it was a book about a middle-aged man who fell in love with a sexually active 12 year old girl. The censors insisted on making the movie slightly less creepy by increasing the girl’s age to 14…and Kubrick took off with it.

Kubrick scrapped much of the book (and a screenplay written by the book’s author) to make his own brand of dark comedy, a movie fun and disturbing at the same time. He masterfully turns each scene, making the viewer sympathize with Professor Humbert (Mason) just long enough to then realize he is basically a starstruck pedophile. By the end of the flick you don’t know what’s right, what’s wrong, or how to feel. It’s a groovy scene, man. 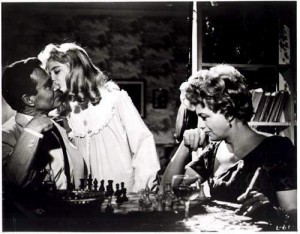 Consider this flick, which goes pretty far in suggesting Professor Humbert is sleeping with Lolita, was released in 1962. This was the same era when absolutely zero cursing, nudity or realistic gore was allowed in American movies. This was the era when Rock ‘n’ Roll music was still considered “devil music” and Chuck Berry was in jail for transporting an underage girl across state lines.

The plot is simple…Humbert, a British literature professor, takes up residence in a quaint New Hampshire house run by Charlotte Haze (Winters). At first he doesn’t want to take the room…until he sees Charlotte’s daughter, Lolita. We assume he probably doesn’t realize at first how young she is, considering she looks like she’s about 20 and acts as sleazily flirtatious as an experienced stripper. This sets up the audience to accept the blooming relationship, at least on some level, as one of a guy in his 40s with a chick in her 20s (perfectly acceptable, right?). Then Kubrick slams us over the head with scenes that very definitely show us her true age, and our brains go swimming with idea of a grown man cheating on his wife with his 14 year old stepdaughter. In a sort of a dark, funny way, of course. Eh, yeah.

The movie moves from a sordid fantasy to a sordid affair, to a journey across America for the stepfather and stepdaughter on the run from themselves and others. I won’t give anymore than that away, you’ll have to watch the flick for yourself to get the details.

Keep in mind this movie was made under the probing eyes of strict mid-century censors. It’s almost unbelievable that the flick passed ANY censorship, considering its context. I suppose calling it a “dark comedy” helped, but even with Peter Sellers in the movie you won’t find too many “laugh out loud” moments. It’s more like “it’s funny because it’s so far out and so damned uncomfortable”, IMHO. 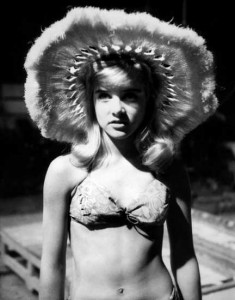 You also won’t find as much symbolism in the movie as you will in later Kubrick films. There is some, no doubt, but I’m guessing he was having a hard enough time getting the movie made without getting arrested without having to figure out two hours of symbolism.

Sue Lyon: Went on to make a few more movies, including Night of the Iguana in 1964 and Tony Rome in 1967. Her last movie was Alligator (yes, the one with the giant alligator in the sewers) in 1980 where she had a small part as a newswomen. She retired after that and, at the time of this posting, she’s 66 years old. Yep.