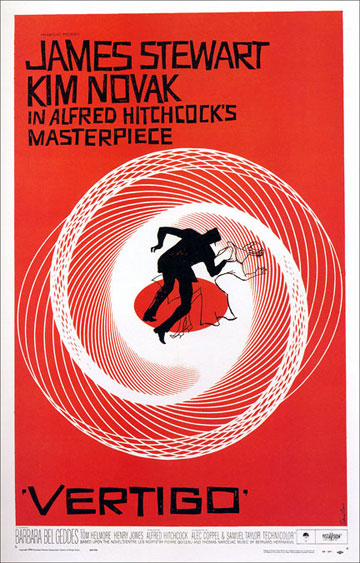 I know it’s Tuesday…gimme a break, yesterday was a national Holiday!

What happens when a middle-aged detective suddenly learns he has an intense fear of heights? He quits the force…only to get dragged back into the investigation business at the behest of an old friend.

Stewart brilliantly plays the ex-cop who, as a favor to an old college buddy, agrees to follow his wife. It seems she’s been traveling to strange places, and the guy believes she’s actually not herself when she does…in fact, he believes she’s been possessed by the spirit of her great grandmother. He fears for her life, of course, since the GG ended her own life with a nosedive out of a tower. Stewart follows…and winds up falling for the dame (Novak). You can probably see where this is heading…but in true Hitchcock style, you must be prepared to expect the unexpected.

Giant redwoods, an old Spanish mission, and tons of great shots of late 1950’s San Francisco play into this strange mystery. Throw in a mod-style cartoon depicting Stewart’s fear of heights and some very kool 50s rides, and you’ve got a sort of time capsule that swings you back to CAL in the mid-20th century.

Vertigo was nominated for two Oscars and Hitchcock was nominated for Outstanding Directorial Achievement in Motion Pictures by the Directors Guild of America. Unlike some of Hitchcock’s other infamous flicks, it’s filmed in Technicolor, which adds a lot to the vibrance of the characters and the “historical” qualities of this 1950’s slice of Americana. 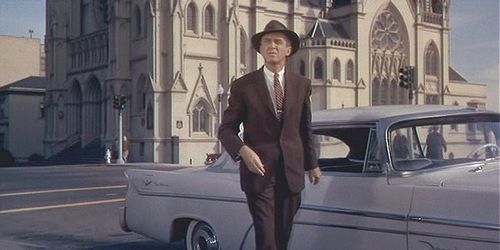 Some interesting tidbits about the film (no spoilers)

“Uncredited second-unit cameraman Irmin Roberts invented the famous “zoom out and track in” shot (now sometimes called “contra-zoom” or “trombone shot”) to convey the sense of vertigo to the audience. The view down the mission stairwell cost $19,000 for just a couple of seconds of screen time.”

“The building exterior used for Madeleine’s apartment building is located at 1000 Mason St., across the street from the Fairmont Hotel.”

“Poorly received by U.S. critics on its release, this film is now hailed as Alfred Hitchcock’s masterpiece.”