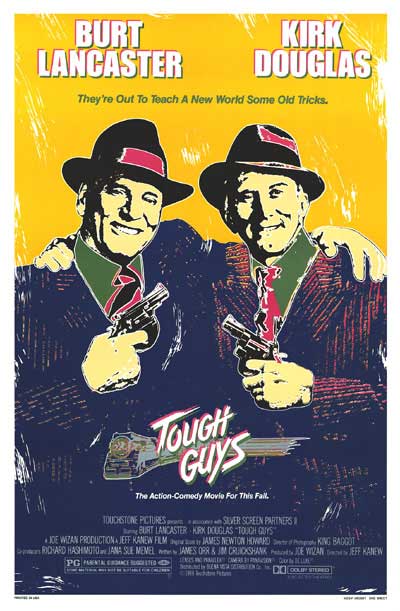 I’ve always been a fan of gangster films, from The Public Enemy to Johnny Dangerously. There are dozens of great gangster/crime comedies, but one that’s often overlooked is a gem from 1986,

It’s a great concept: Two big-time bank robbers (Douglass and Lancaster) get busted robbing a train in 1956, and serve a 30 year stretch for their trouble. They get out in 1986…at the ages of 68 and 72, but it tip-top shape. (This is attributed to years of being…you guessed it, tough guys in prison). They’ve been totally disconnected from modern life, and once paroled the have to try to adjust to a 1980’s world of wimpy street gangs, rap music, strange fashions, and the “old neighborhood” not being what it used to be.

If life on the outside ain’t bad enough, they’re hounded by the cop who busted them in ’56 (Durning) and are followed relentlessly by a hit-man bent on fulfilling a 30-year old contract (Wallach). In between crappy jobs and bad rest home grub, they manage to score a couple of broads…and with the help of their P.O. (Carvey), even try their hand at a few jobs they’re good at…

It’s not the most well produced film (it’s filmed in that kind of “flat” style that was too common in the 1980s, with no real “style”) but the acting is top notch, and watching these two old time tough guys act like they’re 30 years old again is great. There’s even a small part by Billy Barty (no pun intended).

Irony: One of Eli Wallach’s lines, is that if he gets locked up while trying to kill Lancaster and Douglass’ characters, that he’ll wait another 30 years and come after them again. It’s funny, because at their ages there’s no way they’d last that long.

Well…as it turns out, it’s been 26 years since the movie came out, and although we said goodbye to Burt Lancaster in 1994, Kirk Douglass is still kickin’…at the age of 96, Durning is still going at 79, and Eli Wallach…according to IMDB…is still ready to pull that hit at the rip old age of 95.