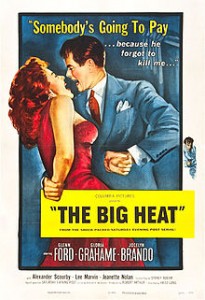 It’s hard for a movie from the 1950s to be so harsh that it can still shock today’s jaded viewers, but

still packs a couple of punches that will make you gasp.

Set in early ’50s Kentport (basically Los Angeles), The Big Heat shows us a glimpse into the lives of brutal gangsters, women of questionable morals, straight cops, crooked cops, politicians on the payroll and cold-blooded murderers.

The Big Heat is a classic noir film directed by Fritz Lang, with award-winning actor Glenn Ford at the helm. As detective Sgt. Dave Bannion, he uncovers a network of criminals and crooked cops running the city, getting away with anything they want for a buck. But he steps to close to the action, and his life crumbles in the fallout.

Shot in gritty black and white with those shadows and effects that make a good noir movie great, The Big Heat is one of the most impactful, realistic thrillers of the era. Ford does a fantastic job of keeping his character low key yet intense. He’s serious…all business, because his work is serious, as are the consequences of his well-intended actions. 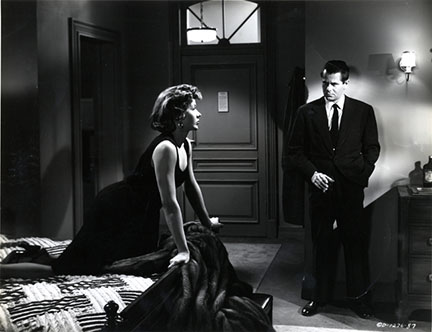 I don’t like to give anything away in my posts, but without spoiling I can say this: If you remember hearing about an old movie where someone gets a pot of boiling hot coffee thrown in their face, this is it. That should give you an idea of how far this movie goes, blowing away our current perception of 1950s censors’ standards.

The Big Heat also features a young Lee Marvin in a role that suits him well, but that you might find in opposition to what he is usually known for. It also features Gloria Grahame (know for her role as Ado Annie in Oklahoma) as the sarcastic, alcoholic and fed-up gangster girlfriend. 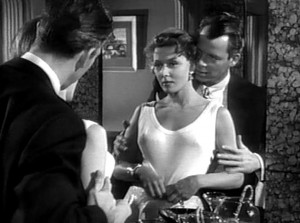 Dinner & Drinks: There’s a scene where Bannion and his wife share a gargantuan steak. Seriously, I don’t think they make cows that big anymore. If you can find one, go for it. Highballs and Martinis are appropriate for this cocktail-era moving picture.

My Take: The first time I tried to watch this movie I couldn’t get into it. Granted, I was distracted while trying to watch it, but my issue was that I was expecting a bullet-riddled B-movie with a lot of action. I was wrong; The Big Heat is an intelligent movie, well written and very well acted. The pace builds as the action intensifies. It’s important that you regard this movie on par with The Maltese Falcon, Double Indemnity or The Lost Weekend. 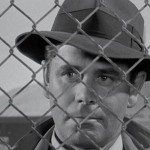 If you love Noir fiction, check out my Noir mystery books, including the Detective Bill Riggins series at StarDustMysteries.com.