In earlier posts, I talked about some of my favorite Halloween toys from the 60’s & 70’s…The Mystic Skull Game, Coffin Bank, Candles, etc. I saved one of the best for last…Which Witch? from 1971! 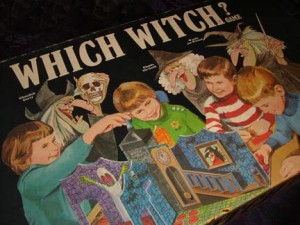 This masterpiece of cardboard fun came from an era when board games were no longer relegated to the flat world, and rose up in glorious three dimensions. Games like Mousetrap, Operation and Hungry Hungry Hippos transformed the single-layer concepts into mechanical miracles of light, sound, and moving parts. And marbles. Which Witch? is an engineering marvel that must have taken the brains at Milton-Bradley many LSD-laden hours to conjure up. 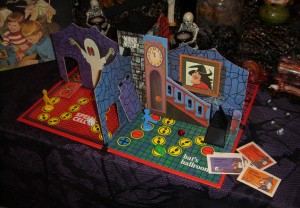 It starts with a typical game board, covered in 60’s style cartoon graphics of the floors of four rooms (in what is apparently a haunted-type house infected with three witches). Next, cardboard walls rise to form the four rooms: The Broom Room, Spell Cell, Witchin’ Kitchen and Bat’s Ballroom. In the center is a chimney which (witch?) doubles as the means to the demise of snoopy little children who enter the abode. (If you pick the card that says, “Ghoulish Gerty Drops It Down The Chimney”, you have to drop the ruby red marble down the top of the roof; 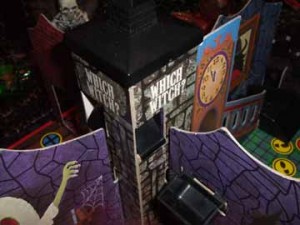 the marble can go in any of four dimensions and wreak havoc on the ill-fated children). In the Bat’s Ballroom, the final room, sets a staircase. The first meddling kid to reach the top of the stairs and land on the “Charmed Circle” (without being turned into a mouse or knocked off his keister) wins the game!

Two young-girl pieces and two young-boy pieces (made of plastic and very 50’s Nancy Drew/Hardy Boys looking) try to make it through these danger-ridden rooms, desperately attempting to avoid the hidden traps and spells. The fear 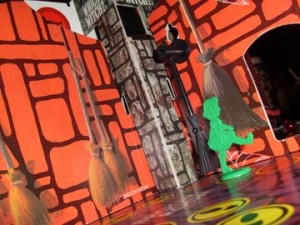 of being hit by a broom, pushed down the stairs, crippled on loose floorboards or plain old hit-in-the-head with a giant ruby marble doesn’t seem to thwart our intrepid explorers. They roll the die and move their spaces, pick a witch card and hope for the best.

I remember playing this game with my mother (something of a witch herself) when I was a young kid. Once, I spent almost the entire game as a mouse. That’s no fun, because you don’t get to move. Another time I got knocked over like eight times in a row. The worst part about this game was that since it was made of cardboard & plastic, it didn’t last. Putting the cardboard walls together meant twisting, bending, and ultimately tearing the parts. My original game died an illustrious wrecking-ball death in the 1970s; I was lucky enough to come across one cheap a few years ago to replace it. You can still find them on eBa 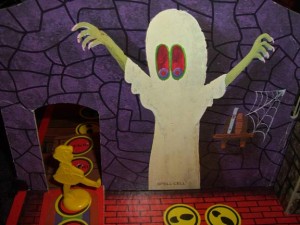 y for anywhere from $20 to $100, depending on condition (and the market). These are only going to get rarer and more expensive, so if you dig this sort of thing I’d recommend finding one soon! 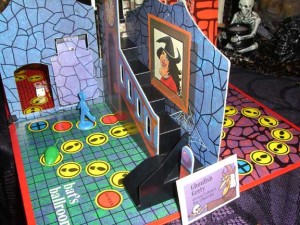 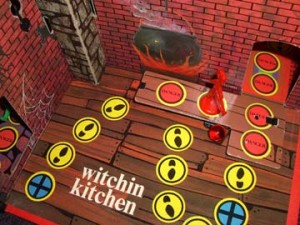 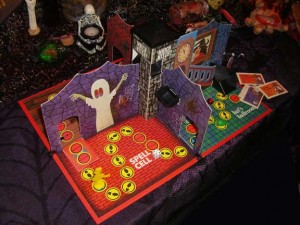 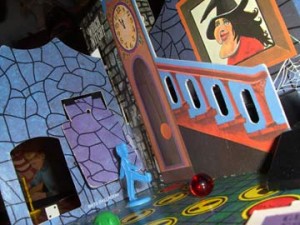