Hey, Bone Daddys & Halloween Kittens! Did you know the Tiki Scene was so hip in the 50’s & 60’s that Ideal Manufacturing came up with a board game with a Tiki-VooDoo Theme??? Dig it, from 1964,

THE GAME OF VOODOO!
…with the mysterious moving skull!

Ohhhhh man! This is one of my all time favorites. The graphics on the box are kookie, a little scary, and wreak of mod-tiki art from the middle of the last century. The game itself is as krazy as it looks, too, with VooDoo dolls, pins, a couldron and of course the MYSTERIOUS MOVING SKULL. 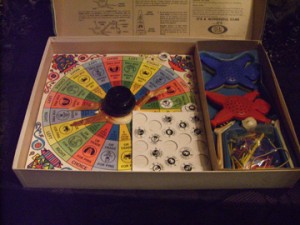 I had one of these when I was a kid back in the 70’s. Always loved the box. When I was 32 and we were moving to Florida, I decided to sell it (couldn’t take everything with me). I remember I paid $.100 for it around 1977. I sold if for $40 before moving. When I got to Florida, I missed it so much I started looking for a replacement. I found one on eBay a year later for $15, and scooped it up. That’s the one you see here. 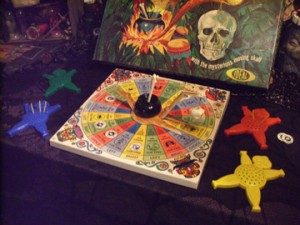 The Skull hangs from a mysterious plastic branch that sticks out of the couldron. When it’s your turn, you stir the couldron with a bone, and the skull mysteriously begins to shake, rattle and roll like krazy! Old Bone Head decides your fate as you encounter snakes, spiders, shrunken heads, and of course ZOMBIES! I tell ya, just checking out the graphics of this game will transport you back to the days when life was game and games looked like they were made by the same kats who drew Mr. Magoo. So if you dig Tiki, try to get your hands on a MYSTIC SKULL Game. There’s a couple of em on eBay right now..but mine ain’t for sale, baby!