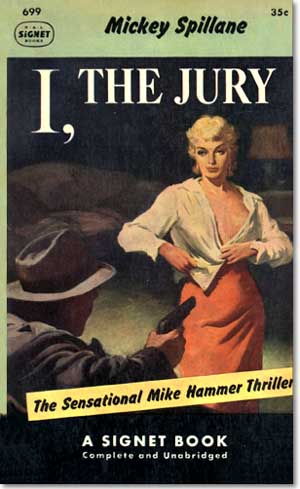 I am sitting at the Tiki Bar on the lanai, sipping a Jack and Ginger and enjoying the cool South Florida evening breeze. This is my favorite time of year, when it’s warm and sunny by day and crisp at night. It’s evenings like this when I remember the old days, before I moved to Florida; how it’s icy cold and dark and gray and morbid in the North East, how everything is dead up there and everything is green and lush and full of life here. It’s evenings like this when I like to crack open a Mike Hammer novel, and remember the past.

When I read Mike Hammer, it takes me back to that other time, that other place. That dark, rough time in the city, when the nights were full of alluring dames and cheap booze and the weight of my .45 kept dragging me down, reminding me that there were big, tough wiseguys that needed a lesson in respect, beat into them the right way, with a crowbar. That other time, long ago; that dark, evil time in the rain-soaked, soot-streaked city.

Phillip Marlow was tough. Sam Spade knew his way around a .38. Even Sonny Crocket could pull a trigger on an Uzi without blinking an eye. But in the tough guy department, none of them came close to Mike Hammer.

I’m not talking about the watered-down-for-TV Mike Hammer, played by Darrin McGavin in the ’50s and Stacey Keach in the ’80s. I’m talking about the real Mike Hammer, the borderline-psychopath detective dreamed up by Mickey Spillane in the late 1940’s through the ’50s, the .45 automatic-toting ex-army special forces operative who learned how to track and maim and kill in the jungles of World War II, the big tough street mug with a fist of ice cold steel and a soft spot in his heart for the dames. That Mike Hammer.

If you’ve read Spillane, you know what I’m getting at. If you haven’t, you should, on the double. Just the fact that you’ve read this far clues me in that you’re gonna like it something big.

Of all the great (and not so great but nevertheless popular) detective stories that came out of the last 80 or so years, from Marlow to Veronica Mars, from Ellery Queen to Tony Rome, from James Bond to Batman, only one really stands out as something darker, something almost horrifying…the original down and dirty streetwise gumshoe, the hardcore dime-store private eye who did things his own way and got away with it, his way. Many copied his style down the line, but they never hit on the real difference, the one thing that made Hammer stand a couple of blocks away from all the rest.

You see, Mike Hammer was a murderer.

Sure, he had a private dick’s ticket, a little card stamped by the State of New York that gave him the legal right to carry a heater and arrest bad guys. But to Hammer, it was nothing more than a ‘get out of jail free’ card. A convenience when it came to court time. A slip of paper that gave him the right clean up his beloved city, to wipe up the back alleys and dimly-lit tap rooms with the faces of the city’s scum, and then to go a step further…because he’d been around the block few times, and he knew the score…arresting the bad guys didn’t do nuts. They’d get off; sure as hell they’d get sent up for a short stretch and be back on the streets mugging and robbing and beating up dames and little guys for spending cash and kicks. Jail wasn’t enough for this filth. They needed to be punished.

The small-time hoods got off easy with a beating they’d remember for life. A couple of cracked ribs, a broken jaw and brain damage usually did the trick with Horse-pushers and lowlife pimps, two-bit gamblers and croocked politicians. But for the killers…well, that was another story. An eye for an eye. If they lived as killers they needed to die as killers, by an equally evil and screwed-up killer. Mike was the self-appointed jailer, judge, jury…and executioner. And he always found a way to make his story stick, make it legit…one way or another, he would kill, he would need to kill; he would justify it as ridding the world of evil and he’d get away clean.

Don’t believe me? Think I’ve gone off the deep end? Set your peepers on this little bit of insight, taken from the first few pages of One Lonely Night, the fourth book in the Mike Hammer series. Published in 1951, the story gives an inner view of Hammer’s mind, the way he thinks, and what he thinks about the world he’s been forced into. To me, these few paragraphs sum up his character, the whole series, and the darker side of life in “the good old days”. It’s what made me really appreciate Mike Hammer when I first read I, The Jury at age 12. It makes me appreciate all the Hammer novels for what they are: The real diary of a madman. 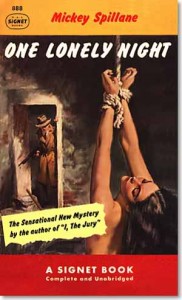 (talking about a judge who wanted to throw the book at him, but could not) “…I was a licensed investigator who knocked off somebody who needed knocking off bad and he couldn’t get to me. So I was a murderer by definition and all the law could do was shake its finger at definitions.”…”maybe he thought I should have stayed there and called the cops when the bastard had a rod in his hand and it was pointing at my gut…” “He had to take me back five years to a time he knew of only second hand and tell me how it took a war to show me the power of the gun and the obscene pleasure that was brutality and force, the spicy sweetness of murder sanctified by law. That was me.” “…There in the muck and slime of the jungle, there in the stink that hung over the beaches rising from the bodies of the dead, there in the half-light of too many dusks and dawns laced together with the crisscrossed patterns of bullets, I had gotten a taste of death and found it palatable to the extent I could never again eat the fruits of a normal civilization.”…”I was a killer. I was a murderer, legalized. I had no reason for living. Yeah, he said that!”*

Mix that insanity in a shaker with a Colt .45 Combat Commander and an insatiable appetite for serving justice. Throw in a couple of ice cubes and a busty brunette secretary named Velda. Pour it in a tall chilled glass, frosty with the blood of a hundred hoodlums and garnish it with a peel of the city at night, and you’ve got a Mike Hammer Manhattan.

There are 13 books in the Mike Hammer series, plus the TV scripts and screen plays. But with the passing of Spillane a few years ago flew any chance of ever hearing Mike’s voice say anything new again. Others may try, some may come close. But no one can dole out the imagery or lay down the style that Mickey gave to his fantastically flawed unsung hero, Mike Hammer.

(Read the books, start from the beginning with I, The Jury and follow Mike all the way through to Black Alley. If you dig reading about real mid-century American culture through the eyes of an author who was writing these books at the time, as the present, you’ll absolutely enjoy Mickey Spillane’s Mike Hammer.)

-Original Content by Christopher Pinto for Tiki Lounge Talk.
*Passages from “One Lonely Night” written by Mickey Spillane, ©1951, 1979, used for informational/educational purposes only.