Hang on to your hats kids, we’re goin’ on a wild ride! It’s 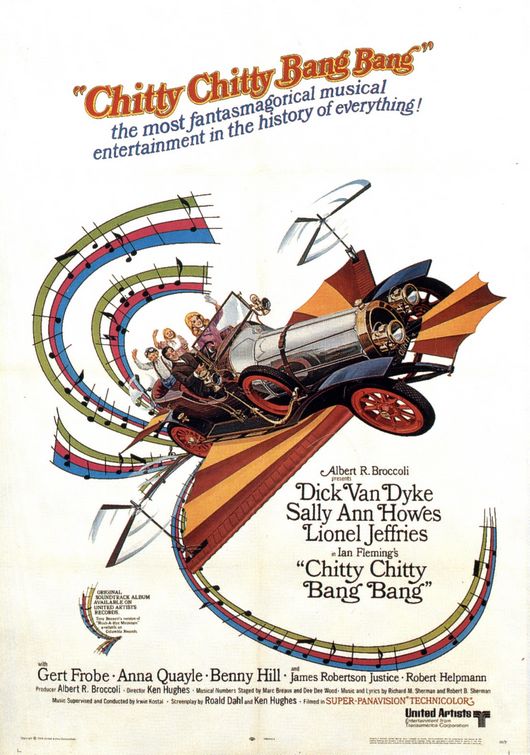 There are few movies that can compare in the combination of craziness, zaniness, modness and madness as this one. Between the comedy of Dick Van Dyke, the beauty of Sally Anne Howes and the original story by Ian Flemming (of James Bond fame) it’s no surprise this flick has remained a favorite for over 40 years.

But let’s not try to fool anyone…the real star of this movie was, of course, the car. A true-bred race car, born to win until a fatal accident retired him to a peaceful life slowly withering away in a field, Chitty Chitty Bang Bang would be rediscovered, and reborn – by Caractacus Potts, a somewhat oddball inventor who seemed to be able to make mechanical wonders out of bits of junk. The ultimate in recycling and restoration came when he brought Chitty back to life, using spare parts from toasters, boilers, and even a boat. And what an amazing cat Caractacus was – a mechanic, machinist, welder, brass-wright, boat-wright, carpenter and inventor all in one! 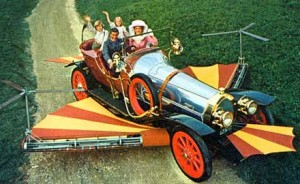 Of course we’re led to believe he didn’t actually build it all by himself…especially the wings and flotation built into the car…there’s a little bit of magic in that car, just a little.

Depending on where you look, you’ll find that there were anywhere from four to six full-size models of this car built for the movie, with at least one being fully-operational. There’s been a lot of conjecture over the years as to what happened to them all…lost, hiding in barns has always been a favorite of mine. But they all seem to be accounted for…apparently one lives somewhere down here in Florida, so I may even get to see it in person one day. 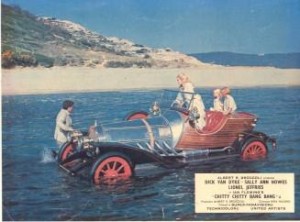 For someone who has had a hand in restoring (or at least fixing up) old cars since I was a kid, this movie really hits home. More than the fact that it’s a kool little car that can fly, more than the fact that it’s magical. There’s another story here, one that most people don’t care much about…it’s a story about taking something that was once magnificent, and that has since fallen from grace; about taking that wondrous piece of machinery and bringing it back to life, giving it a new chance to delight and be adored. I’ve had the good fortune to do that with a couple of cars, some vintage toys, and even an antique clarinet. I’m doing it now with my 1953 Chevy Belair, although not nearly as quickly (or with as much talent) as Caractacus Potts.

Since this is really a kid’s movie, I’d have to go with some sweet snacks and drinks to go along with it. For drinks, I’m thinking along the lines of chocolate milk…maybe a Nutty Irishman, or Chocolate Martini. For snacks, break out the hard candies, chocolates and cakes. Some good old-fashioned Hershey’s chocolate bars and Brach’s hard candies should do the trick. Oh, and don’t for get the Maloxx.