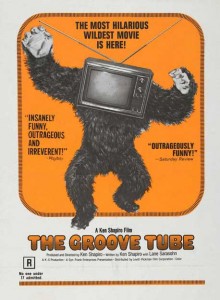 One of the craziest, funniest, raunchiest movies of all time, the first major motion picture ever to use the sketch comedy format made famous by Saturday Night Live and Second City TV, here’s this week’s Mod Movie Monday Feature

In the 60s and early 70s modern ‘sketch’ comedy was still new, and Channel One Theater in New York was one of the groups pioneering this off-beat sort of comedy. From that was born The Groove Tube, written and directed by Ken Shapiro of Channel One.

As always I won’t give anything away, but I can give you a basic idea of what you’re going to see. The viewer is to believe they are not watching a movie, but TV in a world where nudity, adult themes, far-out trips, cursing and unbound comedy is uncensored. After the opening credits (which spoofs 2001-A Space Odyssey and features music by Curtis Mayfield) the viewer seems to be watching a TV that someone else is controlling…changing stations, watching commercials, etc. (much like Robot Chicken does today (except with real people instead of toys)). (wow, that’s a (lot of) brackets!) Each sketch is a full commercial or part of a TV show, and include such greats as Koko the Clown, Brown-25 from The Uranus Corporation,  a commercial for “Geritan”, Chevy Chase singing “I’m looking over a four leaf clover”, and “Channel One Evening News.”

Although Shapiro played the anchor on the Evening News, the skit and its tagline, ‘Good night and have a pleasant tomorrow,’ were taken along to Saturday Night Live with Chevy Chase, and live on today as Weekend Update.

This movie pulled out all the stops, using full-frontal nudity, drug use, prostitution, and silliness in a truly funny way. I also believe this was the first and only time a grown man in a suit, hat and brief case danced through the streets of New York singing “Just me, Just You” and lived to tell about it.

Seriously, this movie is funny as hell. I waited 25 years to see it and wasn’t disappointed. Back in 1975, when it was playing at the Towne-4 movie theater next to the Searstown Mall in Pleasantville, NJ, my family wanted to see it. The TV commercials made it look like a straight-up comedy (without the raunchiness), and the newspaper ad showed it as being rated “G” (it’s actually rated R). When we got to the movies, and I still remember this clearly, the pretty young girl at the ticket counter told my my parents “Aw, you don’t want to take him in there”, to which they said, “But it’s rated G”, to which she replied, “Oh no, sorry about that. The paste up guy at the newspaper didn’t do the ad right and the “R” slipped off the ad, if you look at the paper again you’ll see the “R” overlapping the ad under it.” How about that, huh? So I didn’t get to see it. Considering I was 7, it’s probably a good thing.

It wasn’t until the early 2000’s when I finally found the DVD available on the internet that I was able to see it. I gotta tell you, even after 35 years it still is funny, and has some shock value.

This is some pretty low-brow comedy so for a drink & snacks I’d say cheap beer and chips all the way. Miller High Life and Doritos would be very 70s. If you’re not a beer drinker, then Jack on the rocks, and Herrs potato chips. Some New Yawk style pizza too. Watch it by the glow of a Lava Lamp and a Spencer’s Gifts fiber-optic tree for full effect, man. Yeah.