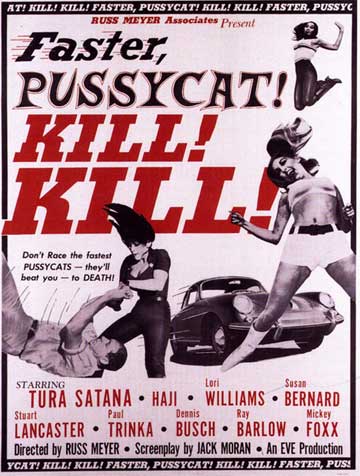 It’s been said that Russ Meyer named this movie Faster Pussycat! KILL! KILL! because he believes that a movie has everything when it contains speed (faster), sex (pussycat) and violence (KILL! KILL!). Well, there’s plenty of all of it in this Black & White B-Beauty.

First off, I don’t think there were three hotter chicks to zoom out of the ’60s. Santana is so stacked it’s a wonder she can fit behind the wheel of that sportster. Of course I have a thing for the blonde stripper. 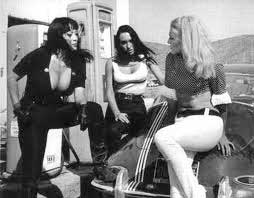 What’s the flick about? Three sleazy, badass girls that like to race hot European sports cars and start brawls go too far and commit murder. It gets more insane from there. Some of it is so violent you’ll wonder how they got away with it in the ’60s. Some of it is funny, intentionally. Some of it is krazy sexy, even by today’s standards. The flick is such a cult classic that one of our favorite retro-lovin’ kats, Quintin Tarantino has his own version in the works, slated for 2012 release. If anyone else were re-making the flick I’d say hell no. But with QT at the wheel, it’s got to be good (but still no match to the original). In the mean time see the original in all its black and white glory, and get ready to experience the dirty, gritty, sleazy side of the 1960’s. 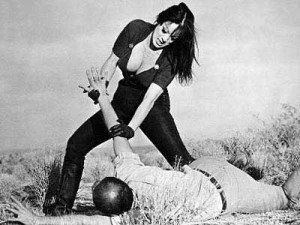 Dinner & Drinks: If you can get your hands on some moonshine, go for it. And Southern cooking all the way…fried chicken, biscuits, you catch my drift. If you’re brave you can try a Tura Santana Cocktail: three parts moonshine, one part hi-test gasoline, with a dash of blood. Light it up. (Tiki Lounge Talk not responsible for burnt eyebrows or damaged organs) 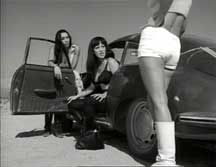 -Tiki Chris Pinto reporting from the back seat of the ’53 Chevy Hot Rod, at the drive-in movies behind the Tiki Bar.