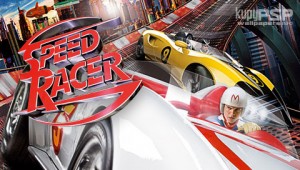 Well kids, this flick is actually bursting with nostalgia, retro-ness, and mod-a-ramic moods. It’s not just a kid’s flick based on the cartoon we all loved once upon a time – it’s a sort of a time capsule, throwing period stuff at us that will have you saying, “I remember that! We had one of those!” Here’s

Let’s start, of course, with the car. A full-scale, drivable model of the original Mach 5 from the cartoon is featured in scene after scene. It’s unbelievable. It even has the push-buttons in the steering wheel, and the shark fins on the back fenders. Then there’s Speed’s family’s house. A cartoon-stylized mid-century modern-palooza, the interior of the house crams in everything from big flower patterns to bamboo to star clocks and bright, mod colors. And the outside – well, it looks like it would be on a 1950’s Plasticville train platform, for real. It’s a dream house for kats like us.

Then there are the race tracks that Speed Racer flies around on. It didn’t take me long to realize these CGI tracks and cars are, in fact, based on the slotless slot-car tracks from the late 70s-80s (also incorporated into the video game).  You remember, the ones where you could cross lanes and knock other cars off the track…yeah, the do that in the movie.

The clothes are kind of kookie too, reminding me of the Roaring 20’s revival of the late 60s-early 70s (I still have a few suits from that era that belonged to my Uncle in Philly). Sure, the movie is all CGI backgrounds and most was filmed on a green screen, but let me tell you the effect is A-OK.

But what about the movie? Is it any good? Well, that’s going to have to be for you to decide. I dug it, a lot. To see that car and those characters come to life was enough for me. I don’t even know if the acting and writing was any good or not, honestly. The visuals had me from the minute it started. The visuals, and the theme song, of course. Some people dig it. Some think it’s stupid. Some think it’s ok. Whatever, it’s worth $3 to rent it just to see that car come to life.

Food & Booze: There is a big to-do about pancakes, and of course Spridel & Chim Chim eat as much candy as they can get their hands on. So pancakes and candy for dinner. No? Hmmm. Well, since the original cartoon was from Japan, how about some Japanese food? You’re right, I don’t eat sushi. Ok, then let’s go with something sort of in between. A California Salad with bright, red cherry tomatoes and yellow peppers, chicken satay over white rice, and blueberry pie for dessert. At least the colors will match the movie. For booze – How about a

Layer and drink it down fast. This doesn’t sound like the tastiest drink, but I’ll bet it will knock you on your ass faster than five times the speed of sound!

One more thing: I think Racer X might secretly be Speed Racer’s older brother. But I’m not sure. Maybe you can solve the mystery.

-Tiki Chris P reporting from the garage next to the Tiki Bar at Tiki Lounge Talk, the swingin’ pad for mod-men and kookie kitties. 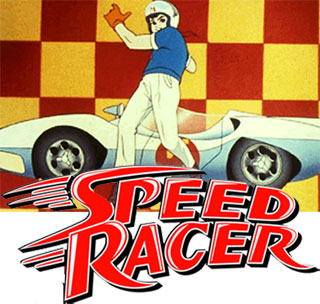 Hey! Since you’ve come this far, here’s a couple’a video for you…

And the original opening from the Cartoon…