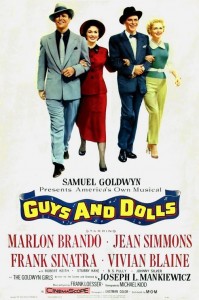 I figured we’d take a little break this week from Noir Movie Monday and get back to the colorful stuff. And dare ain’t no movie more fulla collah den

Without a doubt this flick ranks in my all-time top favorites. The crazy characters, the oddball accents, the music, the floating craps game, the hats, the dolls…there ain’t nothin’ about this movie I don’t fully enjoy with a capital “E”, see?

This was one of the first (good) movies to use non-musical talent (Brando, Simmons) in a musical. Surrounded by actual singers (Sinatra, Blaine), the two leads pulled it off pretty well and paved the way for later musicals to star non-musical talent (all the way up to 2002’s Chicago, forcing notes out of Renne Zellweger, Cathrine Zeta-Jones and Richard Gere). 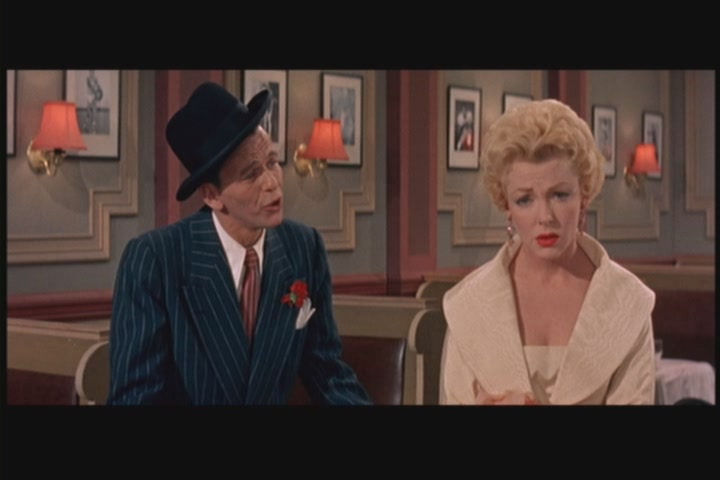 The story, adapted from Damon Runyon’s original short story, is about a collection of gamblers, showgirls, Salvation Army workers and other fringe characters inhabiting the nights of New York City around 1950. Two gamblers in particular, Nathan Detroit (Sinatra) and Sky Masterson (Brando) are focused upon as Detroit tries to find a new venue for his famous floating craps game. A “chance” meeting over cheesecake has Detroit attempting to con Masterson out of some dough in the hopes of using said dough to bribe a certain garage owner to allow the dice to roll. Masterson, a sharp character, sees through this rouse and tells Nathan no dice. He does however boast to Detroit that he can take any doll, no matter how pretty, to Havana for the weekend. Nathan accepts this challenge and the game is on.

As usual, I won’t give away any of the fun stuff in case you haven’t seen the flick. Let’s just say that great music, funny lines and people who speak in the vernacular of the above said paragraph are what you will find in this charming and thoroughly swinging film. 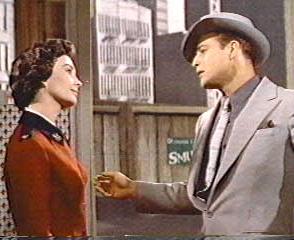 Pile it up in this order:

Cut this triple-decker in half, top with green olives on toothpicks and side with chips, more slaw and kosher pickle. For dessert, cheesecake (or strudel).

(According to Sky Masterson, “Dolce de Leche” means “Sweet of Milk”. It’s a kind of milk shake made with Bacardi…but just enough to act as a preservative. Here’s the modernized version of this classic cocktail)

Shake it all up in a shaker with ice and strain, preferably into a coconut. Top with shaved chocolate and a pinch of cinnamon.

Here’s the opening sequence with “Can Do”. See you at the races, kids!

-Chris “Mack the Knife” Pinto reporting from the starting gate. They’re off!