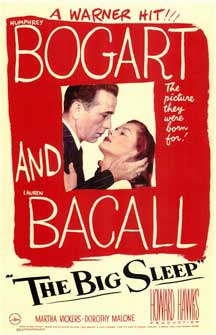 Phillip Marlowe is one of my favorite fictional characters of all time…and The Big Sleep is my favorite Marlowe movie, period. Starring Humphrey Bogart and Lauren Bacall, this cream of the crop Raymond Chandler Noir thriller encompasses everything Film Noir is about: The seedier side of life, making no distinction for class, wealth or education. Crime, and the inevitable punishment. Gambling. Loose women. Murder.

Swing by Marlowe’s scene and you’ll pick up some of the roughest, most colorful characters to hit the silver screen. The plot opens up easy but quickly thickens into a muddy soup of lies, blackmail and murder. Marlowe teeters between being one step ahead and one step behind throughout. But of course, using his wit and relying on a lotta luck, he comes out on top in the end, with a nicely wrapped-up little package: the case solved.

Interesting notes: This flick was shot in 1945, but didn’t release until a year later. Pushed off by a plethora of war films, The Big Sleep premiered so late that wartime stuff (like the “B” gas ration stickers on the cars) was already out of date. There were even some late reshoots, adding Lauren Bacall into even more scenes. This ended up with the film having two separates prints: one that was released for the Army in ’45, and the 1946 version that was released to the public with the changed scenes. I’ve seen both, plus a special cut that was put together later which has all the scenes put in together, and honestly I like the combined one the best. (Don’t know if that’s available, but I found a DVD with both versions plus The Maltese Falcon, Dial “M” for Murder and The Postman Always Rings Twice for $11.99 on Amazon.com). This was also the film that sealed the deal for Bogart and Bacall…He ditched his wife and married his co-star three months after the film was finished. Reportedly, guilt over his affair with Bacall led to Bogart’s over-drinking during filming, enough that he held up production on a couple of dates. Live hard, baby. 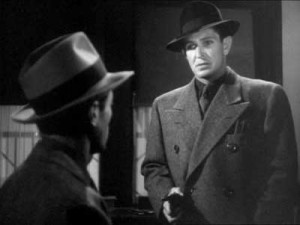 Food & Booze: The story goes that Phillip Marlowe introduced The Gimlet to America in The Long Goodbye. The original recipe calls for Rose’s Lime Juice, not fresh, and most Gimlet drinkers will tell you they prefer the time-honored recipe with the bottled lime.

Combine in a mixing glass over ice and stir; strain into a martini glass. Can also be served on the rocks in an old fashioned glass. Garnish with a lime wedge, plain and simple. 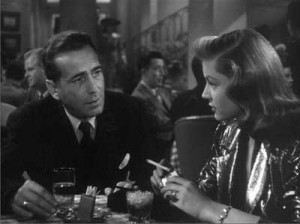 For dinner: “Somebody gunned Geiger or somebody got gunned by Geiger who ran away. Or he had meat for dinner and he likes to do his butchering in the parlour.” So, meat. Maybe Steak Tartare (From AllRecipes.com) 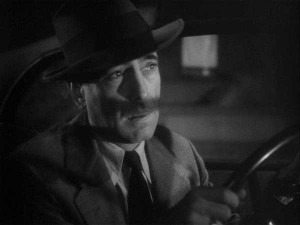 1. In a medium bowl, mix together the beef, mustard, hot pepper sauce, Worcestershire sauce, brandy, salt, pepper and egg until well blended. Arrange the meat in a neat pile on a glass dish, and cover with aluminum foil. Refrigerate for 30 minutes to allow the flavors to blend. Serve as a spread on crackers or toast. The legend goes that Tartare tribes when fighting in the past didn’t even have time to stop and cook their food. They are said to have kept the meat underneath their saddles and mince it in this way. Today this dish is a gourmet classic. This dish is eaten like a pate, spread on a piece of warm toast with fresh tomato and onion rings on top. It is very important though to make sure that both the meat and the egg are very fresh because they are eaten raw.”

Yeah, really, that’s Steak Tartare. Raw egg, raw meat. Mmmm. That’s a trip to the emergency room waiting to happen if I ever saw one. Maybe just a New York Strip done medium rare and a couple of potatoes instead. Yeah.

-Tiki Chris Pinto reporting from the kitchenette in the snack bar at Tiki Lounge Talk, the Blounge for cool movies, exotic cocktails and Tiki-rama.