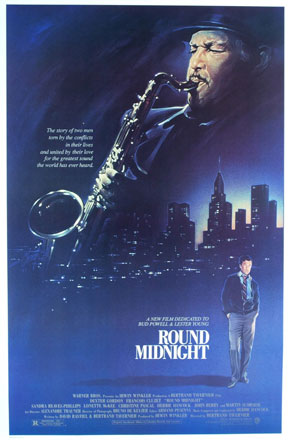 Since it’s JAM (Jazz Appreciation Month…clever, huh?) I thought I’d feature a flick that is all about the scene.

There haven’t been too many jazz musicians who’ve been nominated for an Academy Award. In fact, besides Dexter Gordon who was nominated for Best Actor for his leading role in ’Round Midnight, I don’t think there really are any.

Dexter Gordon started playing for Lionel Hampton’s band around 1940, at the age of 17. His career continued to grow as he played with such greats as Louis Armstrong, Sarah Vaughan, Art Blakey and Billy Eckstine. He is credited as the THE first musician to translate the bop stylings and musical language of Parker and Gillespie to the tenor sax…And that’s a fact, Jack. And not so easy. You try playing a string of 1/16th notes that belong in the scale on a 1930’s tenor horn at 200 BPM, see how easy you think that jazz is. Whew. 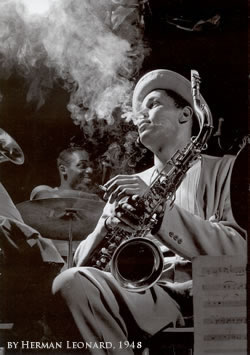 Long Tall Dexter had a prolific recording career, churning out title after title of original tunes and standards. His 1964 album One Flight up had only four songs, but man did they swing.

Dex was the epitome of the Kool Jazz Kat: A sharp dresser with a laid-back attitude, and a smokin’ musician with a style all his own. His tenor stylings certainly did stand out from the crowd, from his unique blend of Parkeresque runs mixed with melodic passages to his deep, full, heavy sound. Anyone who knows even a little about Modern Jazz recognizes his playing by the fifth beat.

So it’s natch that they tapped the kat to play Dale Turner, the brilliant but alcoholic sax man who leads up the 1986 classic noir slice of life flick

Dale Turner’s character is based partly on pianist Bud Powell, partly on saxophonist Lester Young. Both musicians were extraordinary trend-setters (to say the least), moving flawlessly through the styles of big band swing to small combo jazz, bop, blues, and modern jazz. They both had success but never enough, and ‘the life’ eventually led to their demise…both dying from complications due to alcoholism while still young (Powell was 42, Young 40). Gordon does a fantastic job portraying a typical ’50s jazz musician…always practicing, always, partying, always looking for a new sound, always looking for a new gig.

Herbie Hancock won the 1987 Oscar for Best Music, Original Score. But Dex lost out to Paul Newman. Not too bad for a kat who never had a starring role in a movie before. To show you just how big a deal his nomination was, here’s the roll call for 1987 Best Actor nominations:

The movie itself is fantastic, if you dig jazz and want to see what things were like for jazz musicians in the ’50s, by an ’80s point of view. It features a few more real jazzers like Bobby Hutcherson, Freddie Hubbard and Wayne Shorter, and has a few scenes with Martin Scorsese. François Cluzet plays Francis Borler, a jazz buff who meets and befriends Turner. When he realizes his jazz idol is fallen angel, he tries his best to keep him on track. You’ll have to watch the movie to see how it goes.

My Take: I started playing sax for my own enjoyment when I was around thirteen. I learned the old fashioned way…by playing along with records, mainly of big bands, Glenn Miller, Dorsey, Shaw, Goodman, Basie, plus soloists such as Coleman Hawkins, Tex Beneke and Lester Young. Later I discover Sam Butera, and by the time I was 21 I had formed my own style based on these influences.

Then one night while digging the 4-piece jazz combo at Orsatti’s Restaurant in Atlantic City (c. 1992), I struck up a convo with the band leader, a trumpeter. I told him I swung and he invited me to sit in. So the next weekend I came back with my tenor horn, along with my own cheering section which included a couple of knock-out dolls, and played on pieces like Four, All of Me and Blue Bossa. I get free drinks all night for my two cents and it was a blast. After the set, a guy in the lounge asked me how long I’d been playing, and who I learned from. We got to talking and he asked me if I ever heard of Dexter Gordon. I said no (I was still learning a LOT back then). He said, “Man, you gotta check out One Flight Up. It’s life changing.” I laughed, but he was very nicely serious. “Do it man, One Flight Up, Dexter Gordon.” He repeated that a half a dozen times. I can still hear the kat’s voice in my head, clear as day. So the next day I went down to the CD store and picked up a copy. 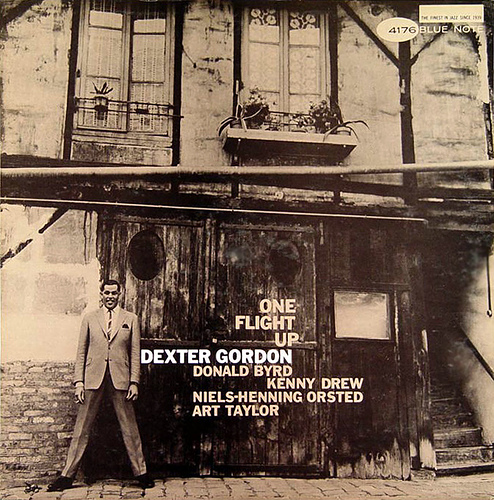 The kid wasn’t kiddin’. Subtly, it was life changing. Four songs, going on forever, chorus after chorus and Dex still had something new to say. I found his sound to be so very kool, so deep, so very direct. He sounded like he was really having fun playing too, which is what really turned me on to his music. I immediately started playing along with his stuff, learning some of his techniques and working a little of his style into my own to come up with something new. Such is jazz.

A week later I went back to Orsatti’s (Which, by the way, was one of the last old-time 1940s Atlantic City landmarks that had survived until the mid ’90s without changing one bit, hence the lounge with the jazz combo) and found the kid there. “Well, was it life changing?” he asked, not even asking if I listened to the album. He just assumed I did, of course. “Yeah, you were right, I’m hip,” I replied. “Told you man,” he said, smiling ear to ear.

Orsatti’s closed up when the owners retired more than 15 years ago. Not sure, but I’m guessing it’s a parking lot or a strip club now. The band broke up long ago and I never saw them or the kid that turned me on to Dexter Gordon again, but I’ll always thank him for it. Listening to One Flight Up got me hooked on Modern Jazz and got me into bop and other jazz forms of the mid century variety. It helped expand my tastes to include more of the frontiersmen like Art Blakey, Oscar Peterson, Dizzie Gillespie and Woody Shaw. It’s been almost 20 years since I first listened to Dex, and over 30 since I fist picked up a horn. That horn and that music have become a part of who I am, whether I play for a crowd or just for myself, I am, and always will be, a Jazz Musician.

-Tiki Chris, aka Zoot, reporting from the smokey stage in the basement bar off 49th Street somewhere in 1959.

2 Replies to “’Round Midnight, 1986 for Noir Movie Monday and Jazz Appreciation Month”