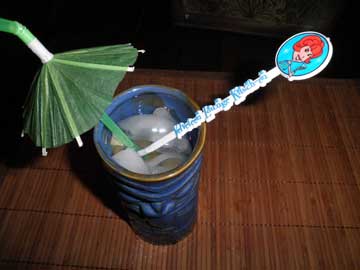 Sometimes just throwing together some stuff can be a really good thing. This week we are featuring a rum drink that came about by literally throwing five rums together with coke and lime. There’s probably a drink out there with the same ingredients, but I’ve already had two of these so I’m making up a name myself, which alzo acounts for any typos, dammit…

Get it? Like the old song? Ok, anyway, I came up with this because I have been building a nice collection of rums over the last year, and was too lazy to mix something difficult this afternooon. Soooo, here’s what I did…

Throw all the rum together in a shaker with ice and shakkkke. strain ovEr rice in a large Tiki mug, and fill with Coke. Thenn add about 2-3 teasppons of fresh lime juice an stir. MMMm. Strong stufff.

I’m sure some of yoos guys will want to play around with the amounts of each rum to get the flavor just right. Me, I just want to go float in the pool. Somebody bring me some sunshine…

If this video doesn’t make you smile, Jack you’re dead.

I would also like to thank Kelly Camille Patterson of The Velveteen Kitsch-en for the kookie cocktail stirrers. They’re tops! Look for a fun post on this crazy chick next week.

Have a Great Memorial Day Weekend! And to all the soldiers who are being remembered on this weekend, I tip my hat to you, where ever you are.