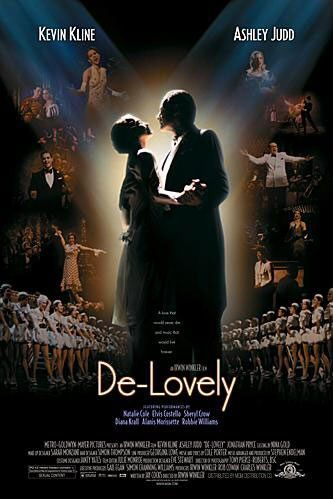 A little known and underrated movie for sure, Delovely is the almost fantasy-like tale of the flamboyant (and very private) life of one of the most beloved songwriters to ever grace us with his insurmountable talent, Cole Porter.

With an outstanding performance by Kevin Kline, you’ll believe your actually seeing and hearing Porter himself from first few seconds of the opening scene. An incredible supporting cast includes Ashley Judd, Johnathon Pryce, and a stage-full of cameos by some of the “Biggest Names in Showbiz” including Elvis Costello, Diana Krall, Sheryl Crow, Natalie Cole…the list goes on.

A portrait of Cole Porter’s life, the story is presented as a fantasy musical biographical stage-show being produced at the end of Porter’s life. He leads “the director” through flashbacks of his colorful life, and we learn about Porter’s previously very secret lifestyle through these scenes…filled, of course, with Porter’s songs woven into the story. The “Show” scenes are very noir, dark, often sad. The “Flashback” scenes are generally uplifting and jubilant. Great juxtaposition adds to the charm.

I  don’t want to give anything away…it’s fun discovering things about this incredible man and his accomplishments and contributions, his marriage to the love of his life, and the hidden meaning behind some of his very risque lyrics (Let’s just say I’ll never think of “Your the top” and “Blow, Gabriel Blow” the same way again.)

The movie is a perfect little time capsule of 1920s-1950s America and Europe, with exquisite sets, costumes, and storyline that any vintage music lover will instantly love. Unfortunately the movie was not a hit; the box office was disappointing, critics and audiences are split down the middle on whether it’s a masterpiece or a long-winded semi-musical bomb. Who is right? Well, if you’re like me…and if you read this blog you are…then you’ll get it, and you’ll love Delovely. 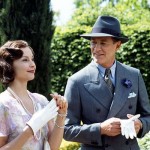 My only complaint about this flick is that (probably for time constraints) some of the best songs are cut off, or just grace the background of a scene. But don’t worry, the soundtrack is available on Amazon.com.

Sit back with a bottle of champagne, a dinner of Chateaubriand, and if you’re the emotional type, a box of tissues, and enjoy this truly incredible movie.

One Reply to “Delovely, The Story of Cole Porter, 2004 for Noir Movie Monday”