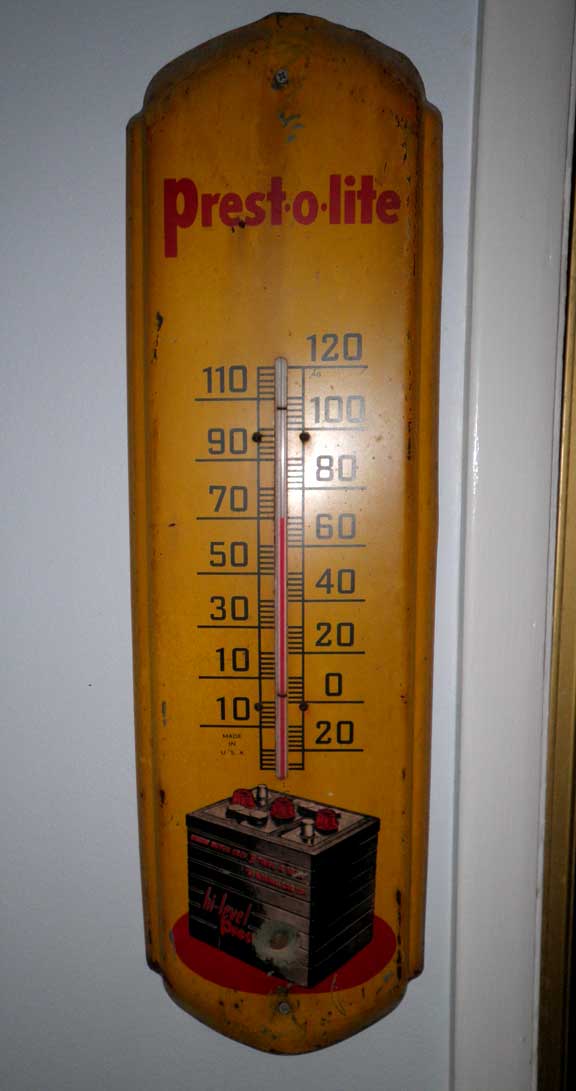 Every once and a while I like to post about junk I have laying around the house. This little goodie is a vintage (original, not repro) advertising wall thermometer.

Prest-o-lite batteries were the cream of the crop back in the 1930’s when this little gem was new. A wall thermometer like this would likely have been given to a gas station or service shop owner as a promo gift, to hang on the wall in the shop or outside by the pumps. It’s built of heavy gauge steel, and the graphics appear to be silk-screened with some heavy-duty pre-war lead-based tough-as-nails paint. It’s about two feet tall, and has a nice three-dimensional art deco look.

Like everything else I write about, it has a story. When I was a kid, living in the suburbs of Atlantic City, there was a very kool old house (built in the early 1920s) across the street from us. It was stucco, had a drive-in basement/garage, hardwood floors and the original 1920s sink and fixtures in the kitchen. Yes, very kool. It also had a couple of acres of nicely-kept land, including a glass and wood green house. As years went by, the owners passed on and the house became a rental. By the time I was in high school it had deteriorated to a heap of crap, and was torn down. Today it is still an empty field. Yay progress.

Anyway, when I was a teenager a family with a son my age moved into the house and we became friends. One day we were exploring what was left of the then dilapidated greenhouse, and found this thermometer nailed to a post inside. I offered the dumbass $3 bucks for it, and he happily took it (and proceeded to spend it on a Slurpy and some video games). That was 1984. It now hangs in our library room, right next to where I’m typing this post.

Note the rather large, circular blemish in the middle of the battery graphic. That is a dent…not a hole, a dent…made by a .38 caliber bullet. Not sure why anyone shot the sign. Maybe I’ll use that for my next murder mystery novel. In any case, the kid kept the slug. I got the sign.

What’s it worth? Who knows. To some collectors it would need to be mint condition to bring top dollar. To others, the authenticity of its used condition makes it worth more. I’ve never seen another one like in the last 25 years. Maybe it’s worth $300 clams. Maybe 50. Maybe more…but it’s not for sale, so it don’t matter much now, do it?

I’ve had this thing for over 25 years. I’m guessing it will make a nice ornament on the lid of my coffin someday.

-Tiki Chris Pinto, bestselling author (soon) of Murder on Tiki Island, reporting from the Library Room (What the hell is a “library room”???)

One Reply to “Prest-o-lite: A Vintage Advertising Thermometer from my past”