I include this flick in the Mod Monday gig because there’s so much in it that screams of vintage while being made with technology way ahead of its time that the movie itself is a sci-fi wonder come true.

The opening credits alone will swing you back to Disney’s “first” golden era, with a clarinet-lead jazz instrumental that’s perfectly paired to a snaky monster and a plethora somewhat confusing and mod-looking doors, reminiscent of the Disney musicals of the 1940s and ’50s.

Then the story opens with a couple of very kool monsters, not particularly scary at all but kind of Muppet-like. They live in an apartment decorated with old-school furniture, one has a jalopy that looks like a ’60s sports car with teeth, they walk down a very 1940s-New York-looking street and report for work in a factory that’s sort of a mix of mid-century modern and minimalist industrial designs.

The retro/vintage themes rack up from there. James Coburn’s voiceover sounds a lot like the bad guys in the old Hannah-Barbara cartoons from the ’60s and ’70s (or Burgermeister Meisterburger in Santa Claus is Comin’ To Town, voiced by Paul Frees). There are retro Disneyland posters on the walls, and a 1960s-style newscaster. There’s even a scene on a tropical beach with a couple of Tiki huts!

The story? Oh, yeah…sometimes I forget to tell you about the story, don’t I. Ok, it’s about a couple of Monsters who work on the scare floor of the corporation who provides electricity for Monstropolis by collecting the screams of human kids and bottling them. The corporation reminded me a lot of Office Depot’s corporate headquarters where I worked briefly at the time this movie was made. The whole thing they do with “I am Monsters, Inc!”…yeah, Office Depot did that with their employees for a training video. Oy.

Anyway, back to the subject…It’s a great flick and the added retro-isms will have kats and kittens like you digging it even more. For a sneak peak (and the numbero uno reason this flick fits the Mod Movie Monday category), check out the two videos below. The first is the opening credits to Monsters, Inc., the second is a clip from Make Mine Music (1947) featuring the Benny Goodman band and visuals by Disney. You’ll see immediately where the designers for Monsters, Inc. got their inspiration. Even the music is similar…not the same, not copied…but inspired. Great job, Pixar. Keep the faith, baby.

-Tiki Chris P. reporting from the Scare Floor at Tiki Lounge Talk. BTW…the bear in this photo look familiar? It should…he’s the original Winnie the Pooh 😉 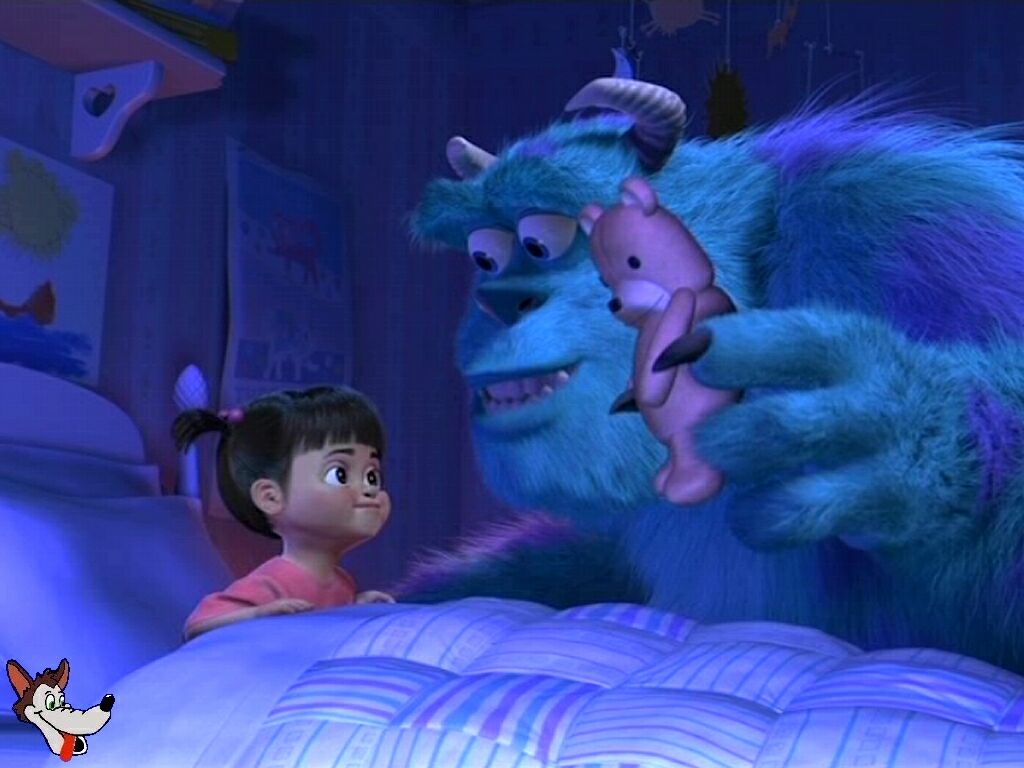