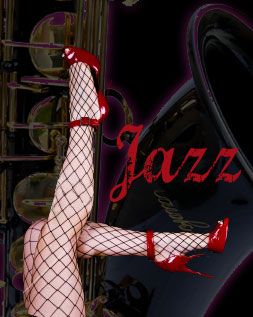 As Jazz Appreciation Month (suitably monikered “J.A.M”) comes down to the last few bars, I thought I throw in a few riffs of my own.

My take on Jazz Appreciation: Most people who don’t like jazz have two main complaints: There are no words, and a lot of it sounds all the same. Well kids, jazz does have words, as vocalists the likes of Ella Fitzgerald to Mel Torme to Billie Holiday to Dean Martin can attest to.

As for the sounds…Here’s the deal, in my humble opinion… you can’t really appreciate jazz until you see and  hear it live, see the musicians play,watch them pour their soul into a solo, see the sweat drip off them as they strain to push that perfect blue note out of a horn. There’s a dynamic in watching jazz live that you just don’t get from an album. Remember, this music was invented when recording was a novelty. These guys played live, and that was their life. Once you see jazz kats jam in person, then you can get hip to the recordings, because instead of hearing a bunch of notes getting thrown around, you catch the real drift the players are laying down. That’s Jazz Appreciation. Can you dig it? yeahhhh.

Now, a little bit about jazz and me, for any of you kats and kittens who might be in the mood for a little story. I added this recording of me playing Take the A-Train on the Tenor Sax just for fun. I’m a little rusty but hey, after 2 drinks I sound great!

The first jazz song I ever remember hearing was a sort of modified version of All Blues (Miles Davis). It was on Sesame Street, a goofy cartoon skit with a jazzy triangle and a square. (see it here on YouTube). Even at that early age, something clicked.

My old man was into Progressive Jazz (Modern Jazz, Traditional Jazz) and turned me onto some kool players like Miles Davis and Sonny Stitt. At around the same time, my Grandfather introduced me to the music of the Big Bands – Miller, Dorsey, Goodman, Shaw. He gave me my first Big Band record, Star Dust by Artie Shaw. That tune has followed me all my life.

When I was around 11, I decided I wanted to play an instrument. I didn’t know much about jazz other than what I was hearing on the Muppet Show, when kats like Dizzy Gillespie would star. First I wanted to play the trombone. Then I heard a Harry James record (I’ve Heard That Song Before) and decided the trumpet was for me. I sold my small coin collection and bought a King Cleavland (still have it).  I didn’t want to take lessons – wanted to figure it out myself. I couldn’t get much sound out of it, but tried like hell anyway. Then one day my old man came home with a clarinet. It was missing some keys in the low register, and the reed was held on with electrical tape.

Turned out to be a very old horn, a turn-of-the-century job. Bought a ligature and a new reed, and started getting some sound out of it. Not long after I picked up a cheap student clarinet in good shape, and started playing along with records, matching the sounds. Still couldn’t play a melody, but I was at least getting sound out of all the holes. Then, on a warm summer day in 1982, while walking around a flea market with my grandmother I came across a vintage licorice stick in great condition for 15 bucks. I convinced grandmom to lay out the dough for it, and that was the start of something big. I swear, that horn is magic. Magic in the real sense – for after fiddling around with it for just a few days, I sat down on my bed and made an attempt to play a song…first few notes…sounded wrong…changed the fingering…and just like that, I was playing Moonglow, in a way that would have made Artie Shaw and Benny Goodman proud.

Soon after I got an alto sax, then a tenor, and taught myself how to play them just like the old-time kats did back in the 20s. I never learned to read music too well, just enough to get by in the college big band but not enough to hurt me none. I play from the heart, I play what I feel. I can play solo or with a group of kats and the better they are, the better I am. I played professionally during the 90s, and after swinging down to the Sunshine State in 2000 decided to play only for myself. I still dig the standards, bossas, latin jazz and bop. Never really got into fusion, but can appreciate what the kats were doing at the time. In the early 90’s someone turned me on to Dexter Gordon, and that got me into post-bop Modern Jazz more than ever.

Today I continue to listen, learn and play. I’m still discovering players and songs from the 70+ years of great jazz, from Louis Armstrong to Louis Prima, from Duke Ellington to Charlie Parker. I’ve been blessed to have seen a few of the greats in person; I’ve been lucky to have watched some of the legacy bands like Miller’s and Count Basie’s carry on the tradition. I saw Duke Ellington’s son, then his grandson lead the Ellington band. I sat in Atlantic City lounges and got to experience Sam Butera and the Wildest  from five feet away. And once, for just a few minutes, I got to meet and talk with Wyinton Marsalis. Man, I am one lucky son of a gun.