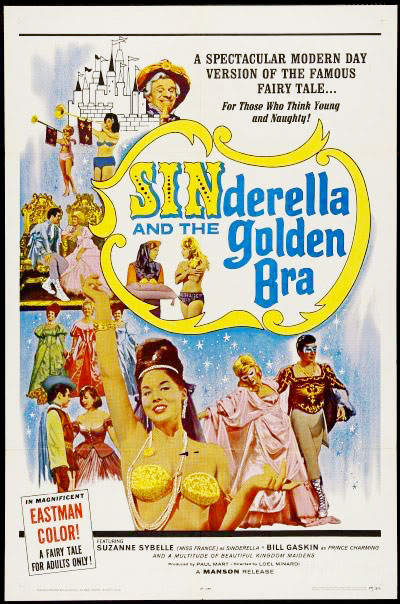 Time for some Nudie Cuties, and a little history lesson!

Let’s swing back to the early 1960s, a time when “Adults Only Fun” usually meant drinking cocktails, putting lampshades on your head and telling dirty jokes 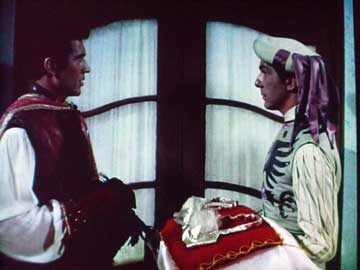 while the kids slept upstairs. Things got “out of hand” when your middle-aged boss had a few too many and made a pass at the housekeeper. For most people.

But for some of those swingers, a party wasn’t a party without a little sex. (And for even fewer, a lot of sex, but that’s another story). Those kats and kittens had to spend the nine to five uptight and respectable. But when the weekend came, a few Martoonies and a couple of Pink Ladies was enough of an excuse to dust off the libido and get a little wild. 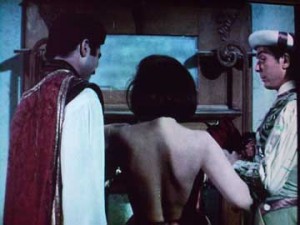 It may be hard to think of your mother getting toasted and dancing on the dining room table to Ray Charles while twirling her bra in the air, but I guarantee you, some of your old ladies did. And flicks like SINderella and the Golden Bra would be playing on Dad’s 16MM projector while she did it.

Ok, if I haven’t tripped you out yet, then read on…

Back in the Atomic age, images of war victims and gangland murders were common, but nudity was strictly no-no. But the market was there, and a small group of enterprising men got together and started filming what they called “Nudie Cuties.” These were an off-shoot of the stag reels and “French” shorts that had been around for ages, showcasing nude women and being shown in very seedy and secluded places. The big difference was, armed with a small budget and a lot of energy, these kats made actual movies, with real scripts, sets, art direction and all. Ok, they may have not been the best movies ever made, but they were vehicles to showcase the most important part of the show: Boobs. These movies were all about boobs, all sizes, all shapes, and all natural. Oh, just for fun they threw in some butt shots and the occasional full-frontal, but always in such a way that they couldn’t get arrested for. Usually. 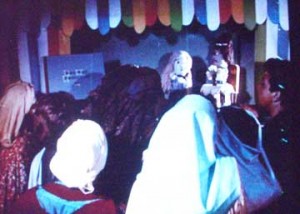 As it turns out, almost all of these movies were filmed down in…you guessed it, Miami, where the weather was always warm (important for filming naked chicks) and the conditions were right. South Florida had long been a favorite of nude photographers and filmers (Bettie Page shot some of her most famous works down here), and models who were willing to strip it all off on camera for a few bucks were easy to find. (Interestingly, even after Nudie Cuties sort of died off, the industry remained in Miami. You may not know it but Miami is the second largest adult film producer in the country, next to L.A.)

OK, now for the movie. SINderella and the Golden Bra is just what you’d think it is…a spoof on the Cinderella story, acted out with lots of topless 60’s chicks. Long story short, SINderella’s fairy godfather gives her a shot at dancing at the ball, yada yada. She leaves just before midnight, but leaves behind her Golden Bra, instead of the customary slipper. You see where this is going, right? The prince then goes through the village getting every chick in town to slide off their peasant dresses and try on the bra. 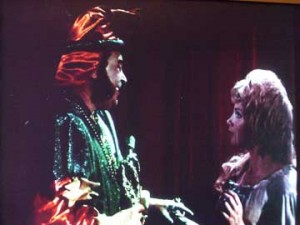 What makes the movie so much fun, is that the sets look like something from Mr. Rogers or some 50’s kids TV show, and the acting is so bad (intentionally of course) and over the top that it makes the whole joke work. It’s not laugh-out-loud funny, but very enjoyable on a “They were getting away with murder and being very risque for the day” level. Plus a lot of the girls are hot by any era’s standards. The DVD comes with a double feature of something called Goldilocks and the Three Bares, which doesn’t have anything to do with the fairytale but has a lot of scenes of Miami in the early 1960s. Plus the nudity is intentionally silly in parts, which makes it worth watching for the “This is pretty bad, even for then” aspect. It also includes some nudie shorts from the early 60s, featuring the kind of stuff they’d play before a feature in a stag house back in the day.

Did I mention it’s a musical?

My take on the movie: Funny how you remember things from way back. In the early 70’s we moved to a town outside of Atlantic City, which just happened to have a drive-in movie theater (The Atlantic Drive In). By most accounts the theater had been there since the early 60s. In the late 60s the state built the Garden State Parkway right next to it, and if you hit a nearby on-ramp at night you could see the giant screen up close and personal. I remember driving by with my parents and reading the huge marquis on the Black Horse Pike one day. I’ll never forget it: Flash Gordon, Cinderella and Goldilocks. I got all excited and said I wanted to go. I was around seven. I’ll never forget how my mother started laughing and then my old man too. I asked them what was so funny. They said, “That’s Flesh Gordon and SINderella. They aren’t kids movies. They’re for grown-ups”. Boy was I disappointed. I didn’t really understand why they’d be for grown-ups when they were obviously titled for kids. Just so happened we were heading for the Ocean City Boardwalk that night, and had to take the before-mentioned on-ramp to get on the Parkway. We came up the curved ramp, and what do you think I saw? The biggest set of boobs I’d ever seen in my life (even til now), bouncing in a zoomed-in closeup scene in SINderella! My parents, being beatniks didn’t get upset, they just laughed their heads off. I did too.

Zoom up 25+ years later. Obscure, impossible to find movies are suddenly easily accessible on this newfangled internets thingy. Between 2001 (when I got a cable modem fast enough to research stuff) and 2005 I started combing the net for all sorts of oddball stuff I’d remembered from the past. One of the things I thought of was this movie, and sure enough I found the DVD from Something Weird Video. And sure enough, that scene with the giant close-up boobs was there, just as I remembered them 😉

Here’s the original trailer for the movie from 1964. If you’d like to see some of the nudie cutie scenes, (you gotta be 18 or older, I’m told) click here for some short video of 60’s chicks in all their glory.

Just double click on the window to start and stop the video.

-Tiki Chris P reporting from the cellar with the padlocked door under the Tiki Bar, behind the 16MM Projector with my Rob Roy in my hand and a bunch of Nudie Cuties on the couches